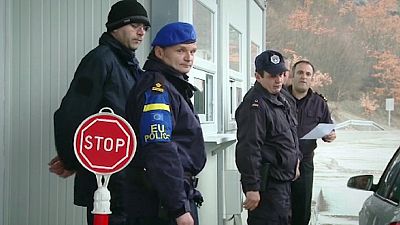 Around 130,000 passengers pass the Merdare crossing point between Kosovo and Serbia everyday.

What makes it special is that both Serb and Albanian customs and police officers work side by side, under the scrutiny of Eulex customs officers.

This is the main crossing point between Serbia and Kosovo set up under the EU devised Integrated Borders management scheme or IBM.

While Belgrade and Pristina still have to agree on how to implement their recent agreement on the North of Kosovo, the IBM scheme has been running smoothly for almost six months, after a difficult start.

Fisnik Rexhepi is from Kosovo’s Ministry of Internal Affairs:

“The result is that the IBM is not only implemented between state agencies, as police, customs, food and veterinary services, but also between countries aiming to normalise relations on their path towards EU integration.”

The next step will be that Serb and Albanian teams will work under the same roof, at a permanent border-crossing premises.

Already, the flow between the two sides has improved considerably says this Serbian truck driver.

“ We cross very fast. We don’t have to wait in line anymore and we have no problems. Both sides treat us well, they’re doing a great job and they get along well. It’s about time to have good neighbourly relationships.”

Aside from facilitating traffic, the IBM scheme has helped reduce smuggling through illegal crossing points, in the North of Kosovo.

Goods imported from Serbia for the use of this Serb inhabited region, have been free of duty until now.

Traffickers, both Serb and Albanian, have taken advantage of this, and used side roads to smuggle goods illegally from the north to the south of Kosovo, 70 percent of the goods seized by customs and police in this storage room in the northern city of Mitrovica, are smuggled through secondary routes in the north

Arianit Rexhepi, is the head of Kosovo customs anti-smuggling team:
“Around here there are many vehicles that belong to smugglers that follow us and the police, to know our position and where we are and what road we are patrolling.”

Thousands of liters of gas for instance escape the scrutiny of customs and police. Bordering country roads just south of Mitrovica, illegal pumps
resell the gas at half the market price. A business which cannot function without full agreement between both Serb and Albanian trafickers, north and south of Kosovo.

Besim Hoti from Mitrovica police believes lessons in cooperation can learned from the smugglers:

“When we talk about smuggling as a criminal activity, Albanians and Serbs work together and collaborate perfectly. This could be taken as a good example for the normal citizens to see how real cooperation should be.”

It is a statement that could provide food for thought for politicians trying to agree on ways to implement the new normalisation agreement between Serbia and Kosovo.