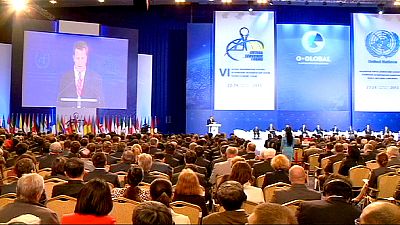 A special World Anti-Crisis Conference was the centre piece of this year’s Astana Economic Forum.

The idea was to provide a platform for addressing what is widely perceived to be a faltering global financial system.

Perhaps unsurprisingly, Europe was the focus given recent banking disasters, soaring youth unemployment, and the prevailing sense of economic uncertainty throughout the eurozone.

Euronews asked some of the assembled world leaders, economic commentators and business experts how we came to be in this state. We also wanted to know what were their solutions for getting the global, and European, economy back on track.

Former Italian Prime Minister Romano Prodi said he believes Europe’s staggering “lack of common policy” was the most crippling factor in bringing the continent to its knees.

“In Europe now, because of this losing mentality, there is the idea that all the world is in crisis. But in reality, the world as a whole has never been so well. Asia is growing, Africa also – starting from zero, of course, but it is still growing…the United States from two to three percent. Only Europe is suffering. When you have zero growth, a horrible rate of unemployment, even more so if we look at youth unemployment, then you have to put some fuel into the economy,” Prodi said.

For Nobel Prize-winning professor Christopher Pissarides, the mistake was rushing into a single currency before creating the necessary institutional mechanisms that would ensure its success.

So we asked him what can be done about that? “It is not going to be easy because politicians have got to make very brave decisions, in particular when forming the banking union and the fiscal union, which I think we need. But they need to be done because if they are not done then the single currency will be holding back growth rather than helping it, which was the original idea,” was Pissarides reply.

For Microsoft’s European chairman, Jan Muehlfeit, the answer is education. He called on politicians to invest in providing Europeans with the right skills to create growth: “The only thing Europe can sell is ideas. In Europe the model is about unlocking European potential, and there is a lot of potential. We need to make sure that we take education and skills as a mantra for the whole Europe.”

Lady Barbara Judge, the chairwoman of the UK Nuclear Authority, thought national self-interest was the problem, and partnership is the prescription: “We have to look at energy policy. One of the things that EU does not have is a strong energy policy. It is another nationalistic situation: each country thinks it has its own solution. In fact, energy is something that we can look at together. If we were to share our different forms of energy, if we were to construct grids that worked across all over Europe, we could lower the price of energy to the consumer. If we lower the price of energy to the consumer, we can use the money to fuel manufacturing.”

More than 9,000 participants gathered for the event’s opening, chaired by euronews’ Stefan Grobe. Almost goading those European punters present, the forum took place in the recently created capital of Kazakhstan – a country currently experiencing massive growth thanks to its enormous hydrocarbon reserves, and the estimated 1.7 million barrels of crude oil it produces each day.

Floating on an exhalation of petrodollars, Kazakhstan has been identified as one of several nations that might actually benefit from what is otherwise a rapidly changing, and notably erratic, global economy.