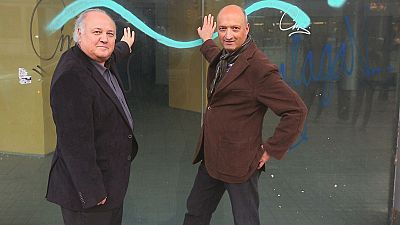 Retirement, illness, career changes – every year 450,000 businesses in Europe change ownership. The problem is that 600,000 jobs are lost in the region every year because of difficulties in selling companies.

Sometimes the situation is complicated by poor preparation or a lack of means to help entrepreneurs.

In the Spanish city of Barcelona, a specialist website – Reempresa – has helped dozens of companies to better cope with those difficult transitions.

Xavier Capmany Crehuet and Jordi Tarrats have worked together for one and a half years. Jordi took over from his brother Carles at Soleplex, a business focused on graffiti removal and the installation of window coatings, when 66-year-old Xavier decided to retire.

The transfer of the business went very well, and despite selling it, Xavier is still part of the company.

“I agreed to work for a year as a consultant with the company. My experience will be useful in case of problems. We also agreed that for three years I will have a percentage of the company’s sales,” explained Xavier.

“It is important he stays with us because he knows the market, the customers, the subtleties of the company,” added Jordi.

Today the company employs 12 people and has plans to hire two more. Through the joint efforts of Xavier and Jordi, the business is developing new markets, particularly in France.

Describing Soleplex employees and the company’s prospects, Xavier said: “These are people who can forge ahead with this company for the next 45 years. They have a future here.”

“We’ve invested in the French market. We’ve recruited a new team, and hopefully turnover will increase by 20 to 30 percent compared to last year,” added Jorgi.

Xavier found a buyer for his business by using the Reempressa website. Reempressa is the first organisation of its kind in Spain and has become a meeting point for buying and selling small businesses.

“It’s six to eight times easier to take over a business that already exists than starting a business from scratch. Reempresa has been involved in 80 transfers, has saved 250 jobs and investment of 4.4 million euros,” said Reempressa president Antoni Abad i Pous.

Reempresa was set up less than two years ago. Teams also provide services such as helping to prepare business plans.