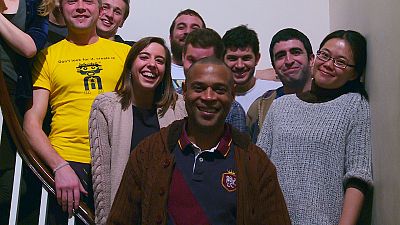 The long-term unemployed, elderly and disabled people, women and ethnic minorities – all these people are under-represented among Europe’s entrepreneurs.

A growing number of schemes, in part sponsored by the European Union, are helping these people make their projects come true.

For the past two years, Michael has been renting out rooms to students. His business has really taken off and he now employs six people.

Michael was unemployed for two years before setting up his own business. One day, he decided to turn to the Outset programme.

The scheme, which recently won the EU’s European Enterprise Promotion Award, provided him with a two-month training course on how to start up a business. This gave him a chance to fine-tune his project and helped him gain confidence.

Michael now runs a successful business, Homestay, which made more than 300,000 euros turnover in 2012. His hostel is home to some 50 students from all over the world and it’s a growing business.

“We were selling bed spaces for just 70 pounds. Now, we are selling them for 175 pounds. I have learned how to market the product a little bit better, to improve the services here. And a lot of that information has come from Outset,” Michael tells us.

“We would like to develop a school, where we can actually teach our guests English on the property. And we would also like to develop links with companies locally, so that we can offer work experience.”

The Outset programme has won praise from the mayor of Bristol, George Ferguson:

“They have created nearly 170 businesses out of the programme, over 200 jobs, that’s over a million pounds added to the Bristol economy,” says the mayor.

Some 1,500 jobs have been created throughout England thanks to this innovative scheme, which takes future entrepreneurs through six stages: the aim is to boost confidence, provide sound business training, set up a business plan and make sure it is viable in order to attract funding.

“Once that has been de-risked in the business plan, then we can introduce them to lenders, and it is much easier for them to get that very critical finance,” says Bev Hurley, who runs the Outset programme.

“We have raised about a million pounds to date for Outset clients, even though some of them have been bankrupt or excluded from main stream finance,” she adds.

According to Michael, the keys to success are the following:

“Having an idea, something you feel really passionate about, believing in yourself and having the confidence to put those ideas into action, and hard work and determination to succeed.”