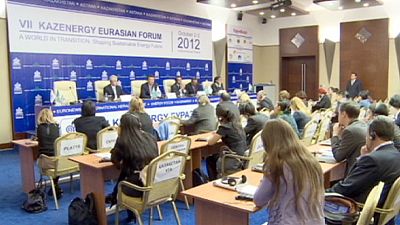 No sector has been spared by the global economic crisis, least of all the energy industry.

At the recent Kazenergy Forum in Astana, debates centred on the hurdles facing the oil industry.

The world population is growing faster than oil production – according to the World Energy Council, global demand will have doubled by 2050.

“The new era is of sustained high oil prices and the reason for that is that as we are looking at the future, oil will continue to be the main source of energy at least for the next few decades,” says Renato Bertani, President of the World Petroleum Council. “The demand is increasing and we’ll need to find oil in areas that are increasingly more difficult, more complex, and more expensive.”

One of the most complex projects ever attempted is in Kazakhstan.

The Kashagan field is considered the world’s largest oil discovery since the 1960s.

The field’s exploration has been delayed since 2005 because of cost overruns and technical challenges.

The first large export is due start next year.

“The geology of the Kashagan field is very complex. There is high underground pressure, gas and sulphuretted hydrogen. We’ve developed new gas repressuring technologies especially for Kashagan. We have used new, modern high-pressure compressors. This technology has already been used at the Tengiz oil field, at the Karachaganak field and now, for the first time, we’ll use it at the Kashagan field.”

The Western companies want to extend their contracts as oil prices, according to their forecasts, won’t drop.

“We need oil and gas prices to be sustained at an appropriate level in order to fund necessary developments in the future. When I say appropriate, we are aiming for around 100 dollars a baril in order to be able to afford long-term oil projects,” he adds.

While oil companies are trying to predict the prices, energy experts are predicting what investments will be needed in order to transform the industry.

The figures are dizzying:

“There is a massive requirement of investment needed, we are talking about 30 trillion dollars over the next two decades,” says Christoph Frei, Secretary general at the World Energy Council. “That means investments in technology, investments in skills, in labour skills, in education, and all that is a great opportunity when it comes to getting the global economy restarted.”

For Europe, in particular, energy security is a very serious question:

“We (Europe) are extremely dependent on energy. We Europeans we must define seriously our energy market, because this, in political terms, is a serious weakness. It’s a weakness for us, our dependency on energy,” says former Spanish prime minister Jose Maria Aznar.

Also widely discussed at the forum: the Shale gas revolution in the US, which has already changed the global energy landscape.

If this happens in the oil sector too, the costs will be high, but the profits may be even greater. The question is: who will reap the gains.