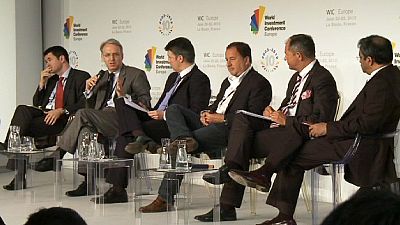 Before being populated by tourists for the summer season, the seaside resort of La Baule, in north-west France hosts investment experts as part of the annual “World Investment Conference Europe”. Here, global business and political leaders come together, to focus on the continent’s strengths as an investment destination.

Talking about investment in Europe has a special meaning right now. With the crisis in the eurozone and the slowing global economy, being able to attract investments is essential to restore growth.

The conference is taking place when international political activity is set on tackling the crisis.

On the second day of the conference Ernst & Young revealed that 2011 was a record year for Direct Foreign Investment projects in Europe, despite the crisis.

“If you’re looking at the European Union, it has 500 or so million consumers. If you extend that to the real business Europe (Russia, Turkey, Ukraine), you’re looking at 850 million. So, investors are saying: you have problems, we have problems but we also like what we see in Europe: stability, sophisticated markets and long-term growth”.

Ernst and Young has estimated that in the national rankings, Britain continues to lead but France now comes in second place to Germany.

“The number of foreign investments which moved to Europe in 2010 and 2011 continues to grow. This is also the case for France and we are progressing. We released the results for 2011 last March. We calculated and identified that 698 investment decisions had been made. These decisions make up 13 per week on average.”
David Appia, Chairman and CEO, Invest in France Agency said.

However, there are those who, whilst recognising the objective values ​​of Europe, feel something more must be done to safeguard the continent’s economy.

Jan Mühlfeit, Chairman Europe, Microsoft Corporation thinks we should be optimistic for the time being:

“If you look at the PISA results, the Program for International Student Assessment, European countries are dropping down and this is the workforce we’ll have 5-7 years from now, so we need to speed up the educational reform to have more entrepreneurship and make sure that we have the right skills for the smart economy”.

Innovation is undoubtedly one of the key elements if European manufacturing is to recover economically, a point which Christophe de Maistre, CEO, Siemens France & South-West Europe agrees:

“Innovation is absolutely the measure for development in developed countries because it matches exactly the challenges we’re facing. Even in troubled times new patents have increased, so this is still a very positive factor. Innovation has seen a boost once again, and this should continue. We can’t do everything, we have to move on a number of areas that seem the most important. “

Globalisation brings out new important international players and new markets. However, Europe continues to boast the ultimate features and resources that, if properly exploited, can boost the role of the old continent as a major player in the world economy.