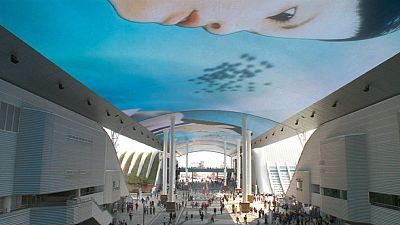 South Korea has been celebrating the living oceans and coastlines. Yeosu Expo 2012 with its village of pavilions shows the country’s determination to raise global awareness of the need for marine protection.

Decorated with the symbol of the Korean flag, the pavilion of the host country has one of the more eye-catching designs on the Expo site. Once inside, the visitors who will be flocking here for the next three months are invited to take part in a traditional dance, before being shown a video on the huge dome screen which measures 30 metres in diameter.

The futuristic Sea Orbiter of architect Jacques Rougerie, is central to the French pavilion. It uses currents to drift across the ocean and is a prototype, as designer Jacques Rougerie explains,

“It’s a vessel which can sail along the Gulfstream with 18 passengers on board who can continually gaze below the surface.”

Construction of the Sea Orbiter could start before the end of the year.

Visitors of the Spanish pavilion enter a darkened space illuminated by the changing lights of the tubes with samples of water collected from 5,000 metres below the surface. They evoke the 2010 Malaspina Expedition: a project aimed at evaluating the impact of climate change in the ocean.

Alongside Italy’s newest technologies for exploring the sea and the recovery artistic artefacts are high definition holographic projections all attracting visitors.

The German pavilion takes visitors on a virtual journey from the country’s coasts to the ocean floor, highlighting that the pollution of the sea often starts elsewhere.

“We are showing here a sample of waste which was found in the Rhine river in Germany and it shows us that the problem of the waste in the sea starts in our rivers,” Dohee An, the German pavilion hostess

Visitors come mainly from South Korea or from neighbouring Asian countries, but there are also international tourists.

“When you go inside a lot of the pavilions and you see some of the science and the predictions that can come about with the science I find that fascinating. My background is in science so I am intrigued by that,” remarks one visitor from the USA while another says, “My number one thing is the architecture like I am just amazed by the whole infrastructure of the Expo site but secondly I like just seeing all the different countries represented and getting an idea of places I never even knew about.”

Euronews correspondent Enrico Bona points out, “With 11,000 km of coasts, South Korea has always had a very strong connection to the sea. And when marine resources start to diminish, the problem doesn’t pass unnoticed.”

At the village of Gunnaeri about 30km from the Expo, fishermen from nearby islands come to sell their catch in what is the biggest fish market that supplies the city of Yeosu. Some of the older fishermen complain that the catch is not as good as it used to be.

“The rising sea temperatures and the phenomenon of the red tide are the main obstacles here. This is particularly true during the summer, when we can’t catch the same amount of fish than in the past.”

It’s a problem through all the supply chain: from fishermen to distributors to vendors, as a local fishmonger explains: “Comparing to three or four years ago, wild fish are becoming a rarity. I think this is mainly the product of climate change. Moreover, the demand largely exceeds supply and this drives the prices higher, causing a problem for us.”

Intensive fishing and pollution have contributed to impoverish marine life problems which have been known about for a long time. Now there a relatively new threat to the oceans known as acidification.

“The ocean is becoming more acid. It’s now 30% more acid in fact since the industrial revolution. And there is a possibility if we keep going on with business as usual that the ocean will be 150 percent more acid. If there was ever a reason for countries to decrease carbon dioxide emissions, this has to be one of the biggest reasons,” says Wendy Watson-Wright, Executive Secretary of the Intergovernmental Oceanographic Commission.

Man is largely responsible for the degradation of the sea. Yet the Expo shows how the sea may provide answers to some global problems, from water shortage to the quest for alternative energy sources.

“The sea will provide us with the resources we need to guarantee the survival of all human kind. This is the key message of the Yeosu declaration that will be signed on the last day of the Expo,” opines Dong-suk Kang, Chairman of the Organising Committee for the Yeosu Expo.

Organisers rely on digital technology, light effects and water cannons to convey the message of harmony with the sea. The show at the Big O, the landmark structure of the Expo, is designed to make a long and lasting impression.