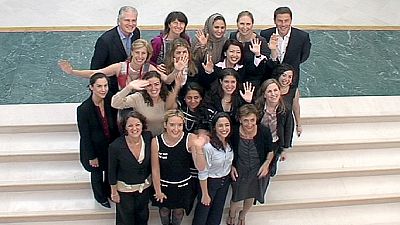 ‘What if…’ is the theme of the Seventh Women’s Forum, a bit like Davos but without the billionaire bling. Meeting this year in Deauville, 1,400 delegates from 80 countries set a new record for this gathering, bringing women together from the economic, political, professional, academic and artistic worlds.

‘What if’ opens a world of possibilities and, notably, what if women could at last break through that ‘glass ceiling’ in the way between them and the top jobs?

On average only one director in 10 in Europe’s top boardrooms is a woman. Ninety seven percent of the time the big company’s CEO is a man.

Yet 60 percent of university graduates are women.

European Commission Vice President Viviane Reding was a guest at Deauville, and with her Justice responsibilities in mind was talking tough: “All the scientific evidence goes in the same direction: women in companies at top level management mean more revenue for companies. I gave the companies until March next year in order to get this talent taken in their companies freely without political pressure. If nothing changes, then we might think of having a European legislation going towards quotas.”

Five EU member states have made a start, setting 30 to 40 percent quotas on large company boards.

France is one of them, spurred into action in part by a report from the Employment ministry’s Brigitte Grésy, who said: “Quotas open the doors. After that, it’s up to their skills.”

And quotas bring some unexpected benefits, too. Grésy’s background in Social Affairs meant she was quick to spot a new trend: “What happens is that training improves. As soon as we decide to let women in there’s a reaction ‘ahh, they won’t be able to do it, they have no management skills…’ So there’s training, and training for everyone, the men too, on an equal basis. It just goes to show that when equality is established women and men benefit. Knowledge is shared, and a mentoring process takes place.”

Christine Ockrent became a star journalist in the 1980s, and knows how hard it was to get her way in the very masculine world of the French media: “Women still have this problem of having to prove themselves, even if they get to the very top. It’s as true in the media as any other profession where once a man gets to a certain level, a certain reputation, he’s made it.”

The fact is men and women just seem to speak a different language.

“Women tend to say ‘we’ instead of ‘I’. This modesty leads women to ask questions when they don’t understand something, whereas men will feign understanding. So even if her question is useful for everyone in the group some will say ‘She’s useless, she doesn’t get it.’ This can lead to a lot of misunderstandings in companies, and men saying ‘women aren’t ambitious enough and don’t want power,’” says psychologist Laurence Dejouany.

While women have had to adapt to the men’s professional codes, their presence in the world of work means men have to learn another language, and that is not so easy.

Some companies find it so hard that for coaches like Mary Boy business is booming. She explained: “There’s a whole feminine dimension of intuition, sensations and emotions whose place in the business world simply isn’t recognised. For several years now I’ve had companies ask me to teach their managers how to take this dimension into account when following their careers, or when evaluating the people around them.”

But attitudes are changing, especially among the young. One of the reasons? Once again, it is that great driver of social change the internet, and its omnipotent social networks.

“Social networks are providing us with a weapon of mass construction for equality. Equality of dialogue, and the eternal conversation between men and women. This will have consequences for any company. Equality today starts with teenagers, and it is going to continue,” concluded sociologist Michel Ladet.