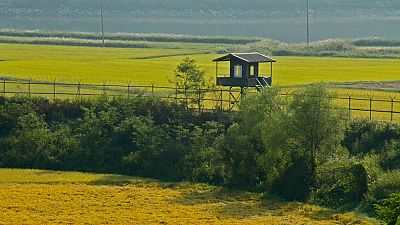 In South Korea, in one of the most heavily militarised zones in the world, they are transforming the Demilitarised Zone (DMZ) – a symbol of war, tension and separation – into a biodiversity paradise for eco-tourists. And they hope it wil become a Unesco World Heritage site.

Dae-Ho Kim, the director of the Green Tourism Centre said: “The South Korean government is creating 10 eco-tourism projects inside and around the DMZ. We are building tourist infrastructure and studying how to protect the environment and promote the regions near No-Man’s Land. We are going to show off the DMZ and protect it. This is why we asked Unesco to include the DMZ in the list of world heritage sites.”

Events like the “DMZ Cycle Parade” at Imjingak, mean the Civilian Control Line boundary is increasingly open to the public. This buffer zone extends 5 to 10 kilometres from the DMZ.

The DMZ has separated North and South Korea since the armistice in 1953 which ended the Korean War. It is 250km long and extends for 2km each side of the border. It is home to many endangered species.

From Imjingak we travelled to Jeonjin Gyo Gate and crossed the Civil Control Line and our guide took us on a tour of the fields, where they grow Ginseng and green beans. Bong Yeon Cho, resident and tourist guide said: “Nobody’s come here for nearly 60 years so the environment is untouched. It’s a paradise for wild animals and plants. In winter there are thousands of eagles. And cranes too. There are many protected species.”

Yen Cho Bong is one of 800 people who were allowed to move into the Civilian Control Area ten years ago. He lives 7km from the border, and takes groups of up to 300 people on walking tours of the area. He said: “We still cannot go everywhere because of the mine fields. When more tourists come, we’ll have to guide them on safe paths in small groups.”

25 kms away in Hwacheon there are more soldiers here than civilians, but the atmosphere is relaxed. The town is also part of the DMZ eco-tourism project. Hwacheon’s eco-park will open next year, and the floating bridge is already open.

Visiting the DMZ isn’t only about Korean history. Many Koreans come here to wish for reunification and pray for their families in the North. Hundreds of thousands of people were separated from each other by the Korean War, and haven’t seen their loved ones since.

The aim of the DMZ project to work towards North and South Korea one day being able to work together to preserve their shared ecological heritage.