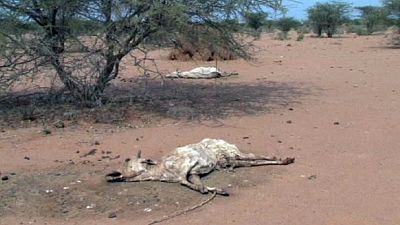 The Horn of Africa is facing its worst drought for decades. The need for fresh water for people there is simply a matter of life and death. While climate change and environmental factors have been blamed for the increasing scarcity of this most valuable resource, it is not the only reason for the region’s difficulties.

Ana Cascao from the Stockholm International Water Institute said: “There are plenty of reasons, one is of course, the drought. The other is political mismanagement, a vacuum in terms of political leadership in Somalia; there’s no central power.”

But managing a lack of water is not only confined to Africa. Countries experiencing rapid urbanisation are also struggling to cope with demand. An issue highlighted at this year’s World Water Week, recently held in Stockholm.

Anders Bertell from the International Water Institute said: “We all know that the situation in these urban areas often leads to water related diseases, such as diarrhoea, malaria and cholera epidemics, having devastating effects on the livelihoods of families but also severe effects on the economy of their countries.”

The conference in the Swedish capital brought together local leaders from around the world, including India. The city of Hyderabad in the centre of the country has seen fast economic growth in recent years attracting thousands of people from poor rural areas. Many end up in slums not connected to the water supply, something city officials there insist they are trying to change.

In Brazil’s Sao Paulo the reasons for the city’s large influx of rural poor are similar to those in Hyderabad. The city’s sprawling shanty towns, however, have become a major flood risk.

Eduardo Jorge the city’s Environment Secretary said: “The council is providing housing to poor people, to get them out of these places. That way they get better housing conditions and at the same time clean water.”

In Rwanda, the country’s capital Kigali has also seen recent rapid growth. But old habits die hard. Many inhabitants continue to live like they have always done, but in an urban setting. Local authorities argue if they are to establish a proper water supply network in the city, the distance between settlements needs to be smaller.

Aisa Kirabo Kacyira, Governor of Rawanda’s Eastern Province and former Mayor of Kigali, said: “For us to be able to be cost-effective, we need to concentrate our settlements. Initially, people would want to have big homesteads, they want to live scattered, but that would only be easy if you are going to use water from natural springs. If you want to give them water that is portable, that is clean, then you need to look at the economics of it.”

Rich countries too are struggling to manage their water supplies. In the US state of California the Mayor of Pleasanton near San Francisco says authorities have a battle to convince people to consume less, even in dry periods.

Jennifer Hosterman, Mayor of Pleasanton, said: “The people in my town consume 244 gallons (924.76 litres) per capita per day. Now, why is that? Lots of it is commercial. But it’s also because we have people who have large pieces of property and insist on having sweeping green turfs and that means watering all the time.”

In India, ways of getting water to large urban areas have been around for more than 3,000 years. But in today’s India, as in many parts of the world, it is not just about technology, it is about the political will.