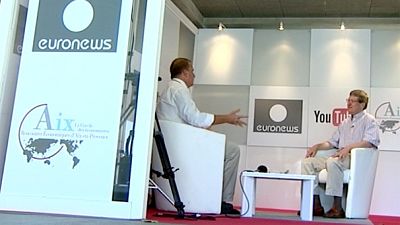 It’s vacation time in Aix-en-Provence. A time to relax and enjoy this beautiful town in the south of France. Yet some peoples pursuits, are patently more academic.

Every year, the ‘Cercle des Economistes’, a high-level group of economists, organises its summer conference here. Open to students and business minded members of the public, this year’s topic revolves around the future role of the state in this post-crisis period.

But does that threaten some of the core functions of the state? No, says OECD Secretary-General Angel Gurria: “Governments are there and have absolutely lost room for maneuvre but they are still the only ones who can define the framework and make it possible for the private sector and for the banks and investors to thrive.”

Helping banks and investors is a noble thing; if you are an investor. But for mainstream people who struggle to make ends meet, the spectacular rescue of the financial sector smacks of injustice.

As a result, the public have reacted in a very unexpected way, says Francis Fukuyama of Stanford University: “Well, there is a great paradox involved, because the crisis should have led to a rise to a certain left-wing populism.

It was created on Wall Street by conservative policies, free market policies, and it hurt a lot of ordinary people. And what you have instead is a growth of right-wing populism, not just in the United States, but virtually every European country now has such a political party.”

Right-wing populism is the expression of a certain disappointment with the government.

Elie Cohen, one of France’s top economists, therefore urges a much stronger state: “We have seen that self regulation and de-regulation have produced disastrous results with regard to the dynamism of the financial system. So we need the return of the state as regulator. This seems indispensable to me.”

A more active state seems desirable but the crisis has used up all its firepower. Consequently, future public action will be moderate, says Jean-Hervé Lorenzi, President the “Cercle des Economistes”: “It is clear that state intervention will not be as before. It will be more rational and limited. Some areas will largely be funded by the private sector. We are in a situation in which borders will be moving.”

But a shift toward the private sector risks to further penalize the middle class, says Robert Reich of Berkeley, Labour Secretary under Bill Clinton: “Education, healthcare and pensions are not just personal goods, there are also public goods, they hold a society together.

They create opportunities, they create economic security for a large number of people. If you privatize them, it is not at all clear that they will continue to provide social coherence and a sense of fairness.”

The sense of fairness is deeply rooted in American society where many believe they are scapegoats of failed policies.

According to Jeffry Frieden of Harvard, that feeling has created a particular victim; political compromise: “American society is currently absorbed in fighting over who is going to pay the burden of adjustment and who is going to pay for these debts that have been accumulated.

But I see very little willingness at this point to sit down and talk seriously about distributing that burden wisely or fairly. So, I’m concerned. I think the United States faces a very difficult next five, seven to ten years.”

Europe also faces a difficult future. The crisis has put our societies on a road to the unknown.

Asked to analyze the situation of the euro zone, two well-known Scandinavian politicians offer their advice – and the certainty that we’re all in this together.

Anders Borg, Swedish Finance Minister said: “To my mind, it is not realistic to see that the North Europeans will subsidize the lack of fiscal responsibility in the south. So, the only long-term solution is to have a more stringent fiscal framework. Not more European government, but more European governance.”

Poul Nyrup Rasmussen, President of the party of European Socialists continues: “The point for the time being for the euro zone is: too lacking in leadership, too much hesitation, too much dependency on national interests on the short term and too little long-term thinking and courage to explain the necessity of having common solutions.

Interviewer: “So, no vision?”

European societies need to learn to adjust to a new pace that seems to originate in emerging countries, today’s drivers of growth.

Europe is weighed down by cumbersome procedures but it’s also endowed with important advantages.

The crisis can spark off new initiatives – so it’s up to the people of Europe to seize this moment of opportunity.