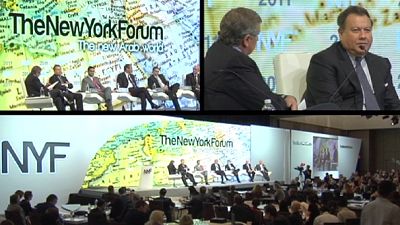 The upheaval sweeping the Arab world has generated new hope for the future, but investment will be crucial if demonstrators’ expectations are to be met. Thousands of kilometres away the issue was debated at the recent New York Forum, a gathering of top business leaders and thinkers.

Tunisia’s finance minister Jaloul Ayed said: “In Tunisia for example (there are) 700,000 unemployed. How are you going to find jobs for those? Through investments. Do you know how much we should invest to absorb those 700,000 unemployed? We need to invest something close to 25 to 30 billion dollars. And so the real question is: who is going to be investing that?”

Some believe investors will wait until things settle down before seeking out new markets. Others insist now is the right time to seize business opportunities.

Chairman and CEO of the Moroccan phospahte company OCP, Mostafa Terrab, told euronews: “There are two parameters one has to keep in mind: one is the tremendous potential for growth in these regions that is frankly yet untapped; and the other one is that the changes that you alluded to are all going towards increased rule of law, including in business, and I think that’s a fundamental criterion.”

The interest is not just in finding foreign companies and individuals. Venture capitalists say expat communities are seen as a big source of potential future investment.

Ahmed El Alfi, the chairman of the Egyptian firm Sawari Ventures told euronews: “They (the expats) are more familiar with the country, with the systems there, and they’re much more willing to contribute. As I mentioned, there are eight million Egyptians living abroad, versus 80 million in the country. Those eight million probably have an income equal to the remaining 80 million in Egypt. So they are a tremendous asset that can be encouraged to invest back in the country.”

Some experts though believe that big spending on capital projects should not be the priority. They say strip away the privileges from the elite first.

Edmund Phelps won the Nobel Prize for Economics in 2006. “It’s a little disquieting when some of my European economist friends propose massive capital building structures in the desert,” he said. “That’s not going to solve the problem of young Tunisians in the cities and young Egyptians in the cities unable to get on with their careers.”

The Moroccan-born founder of the New York Forum, Richard Attias, agrees that entrepreneurship among the young has to be encouraged more.

“All governments have to support entrepreneurship by giving the tools, the financing, to the youth generation, which has so much energy,” Attias said. “And instead of being in the street demonstrating because they lost their dignity, we should definitely give them an answer, how to support them to become entrepreneurs or to find a new way to find a job.”

New leaders are also being told to look at the lessons in other regions where similar political change has taken place, including Latin America.

The president of the Inter-American Development Bank, Luis Alberto Moreno, said: “The more important thing is how you fine-tune the process of democratic inclusion with development, especially for those who are really at the heart of the uprising, which are people who are young, who have no opportunity. How to build micro-finance, how to build possibilities of entrepreneurship, especially small entrepreneurship.”

One prominent columnist agrees that countries like the US must financially support the change in Arab countries, describing it as the world’s most stirring and encouraging development this century.

Roger Cohen of the New York Times said: “The United States is stronger, and Europe, when their interests and their values are aligned. They have not been aligned in the Middle East. We have been propping up these dictatorships, and I think it’s very healthy for the world to get beyond the binary thinking which held that: it’s these guys or it’s the Islamists. That’s how Gaddafi portrayed himself. That’s how Mubarak portrayed himself.”

But the new Arab leaders are now under pressure to meet the huge expectations of those who demonstrated for change. They know they must quickly find the right formula for success and reassure their populations.

Tunisia’s finance minister Jaloul Ayed added: “We have a vision. We have a plan. We have the means. Keep your shirt on. Calm down. It’s coming.”

euronews correspondent in New York, Seamus Kearney, said: “Behind the headlines and the dramatic images of the change we’re seeing in the Middle East, debate about the longterm reality on the ground is now underway in earnest. And one thing is certain: how to invest in that change, and make sure it’s economically viable, is becoming one of the top priorities.”