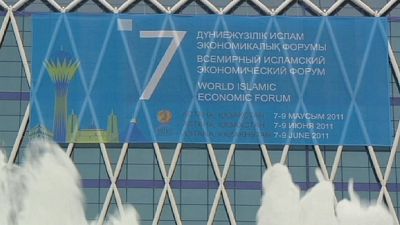 When most think of the leading Muslim nations it is probably safe to say that Kazakhstan does not usually spring to mind.

Yet the sprawling Central Asian country becomes more and more important in the Islamic world: it has just hosted the World Islamic Economic Forum and is about to take over the prestigious presidency of the Organisation of the Islamic Conference (OIC).

The country is proud of its religious tolerance and its economic success – Kazakhstan’s economy has grown twelvefold since 1991.

Kazakhstan’s foreign minister would like to see other Islamic countries emulate Kazakhstan’s path to progress.

Yerzhan Kazykhanov told euronews: “The voices of the moderate countries who can concentrate on economic development, concentrate on improving their ways and the standards of living of their own people, of their own citizens, have to be loud, even louder than those voices who are defending the extremists and their ambitions.”

The World Islamic Economic Forum wants to be a platform for those in the Muslim world who are interested in a market economy, a tolerant civil society and democratic principles.

The forum’s chairman Tun Musa Itam urged Muslims not to waste time and energy on a pointless religious narrow-mindedness.

He said: “I insist that in the WIEF confines, in our discussions there is no politics, no ideology, no religion, no spiritualism. If you want to talk about that, you go somewhere else. If you are with us, we only talk about development.”

At the forum Kazakhstan’s president Nursultan Nazarbayev surprised the audience with a no-holds-barred criticism of conservatism in the Muslim world.

He mused: Where are the universities in the Islamic world that made it to the top 100 internationally? Where are Islamic Nobel Prize laureates? Where is innovation in research and technology coming from an Islamic country?

There are none, he said. That is why Muslim countries must adopt a strategy of modernising Islam to the benefit of its people.

Delegates heard that women must be given adequate opportunities if the Muslim world is to become more dynamic.

Businesswomen from around the Islamic world used the forum to share their experiences and to call on women to be more assertive and more competitive – in business and in civil society.

According to Malaysia’s minister for women, Shahrizat Abdul Jalil, no country can be successful if it blocks the development and creativity of half of its population.

Seen from a European perspective, there is much to gain from an Islamic world that is more open-minded and tolerant, according to former Dutch Prime Minister Wim Kok.

He told euronews: “The best way to go forward is to have an open dialogue and really to show interest in each other and try to have a mutual benefit from cooperation, because in this interconnected global society we are living in today and tomorrow we can not afford, none of us, the luxury to do it all by ourselves. We need to join forces and to understand each other, if you like it or not. And I like it.”

The discussions in Astana showed that Muslim countries do have the tools, like the Islamic banking system for example, to take their societies forward.

Our reporter Stefan Grobe concluded: “The participants of the World Islamic Economic Forum have underlined one thing: they do not want to leave the future of the 21st century to the US, China and India alone. So they are determined to invest massively in modernisation. Kazakhstan is the perfect example. They see no room whatsoever for political and religious extremism.