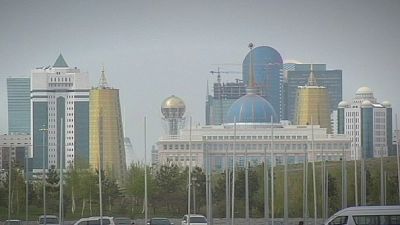 Kazakhstan is a country of 16 million people with the most thriving of central Asia’s emerging economies. In the past, it was only really known in the West because of two things – the space centre in Baikonur and the country’s immense oil and gas reserves. The latter has made the country prosperous. Today, cranes and skyscrapers cover inner city Astana.

For four years, the country has hosted the Astana Economic Forum, an increasingly important East-West meeting point for global investors.

Kazakhstan wants to be heard when it comes to international financial matters and is eager to catch up with high industrial standards, as Michel Glos, Angela Merkel’s first economics minister, explained: “The sectors that Kazakhstan is particularly interested in are construction, transport, and engineering. They also want to develop modern energy production including green forms of energy.”

What is needed most is global financial stability. Many worry that the dollar-centred monetary system is sick, leaving some to present radical proposals. Judy Shelton from Atlas Economic Research Foundation, a US think tank is one of these people: “We can’t have a sound monetary policy until we have sound finances. I hope the future is to restore soundness to the dollar and even possibly link it to gold, which even though that is discussed as somewhat of an extreme measure, it’s fairly radical. But you’re getting a strong movement in the United States, and I think around the world. There is plenty of interest in gold as a possible unit of account and maybe the basis of a modern global gold standard.”

Going back to the gold standard is controversial. The Forum brought together advocates of fixed exchange rates and floating rates.

Canadian Nobel Prize laureate and one of the academic founders of the euro, Robert Mundell, is strongly against the policy of debt: “It’s a syndrome all over the western world, all over the democratic world. I think it’s a sin of democracy. It has become so because politicians have wanted to give the public, the electorate, what people want. And what they want is more and more entitlement, more and more government involvement.”

If the current monetary system crumbles under mountains of US and euro zone debt, emerging economies would suffer most.

That is unfair, said the head of the Central Bank of the United Arab Emirates, Sultan Al Suwaidi. He wants change: “It’s important to reform the international monetary system after the global financial crisis. But I think the voice of small emerging economies should be heard louder. I think the representation, at this point in time, for the emerging economies is not sufficient.”

Representation on its own is not enough, according to Bolivia’s ex-president, Jorge Quiroga. When asked if the G20 is an adequate answer to the problem, the former premier replied: “Probably not, but it’s a lot better than what we had before. When anybody asks me, what is the ideal size of the “G”? If my country were number 15, I would like it to be G15, it would be the last one to get in and no one else. If you’re number 35, you want G35. So, there will always be complaints.”

What emerging economies – from Bolivia to the Emirates and Kazakhstan – demand from developed countries is more responsibility on a global scale and closer international cooperation remains at the top of the agenda.

Debates in Astana have focused on the need to reform international financial systems. As an important emerging country in central Asia, Kazakhstan wants to contribute to that process by bringing about a better dialogue between continents.