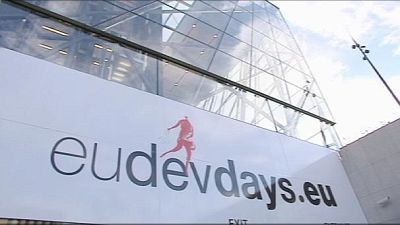 Grace Mueni Nyaa is the founder of the Kyome Fresh Company Ltd:

This December was the first time Grace Mueni Nyaa ever set foot in Brussels. She was invited to the European Development Days to tell the story about how her village, Kyome, in just seven years, became a viable agricultural co-operative.

Thanks to logistic and technical support from the European Union, Kyome’s fruits and vegetables meet international standards, and the Kyome Fresh Company exports to developed countries worldwide. Grace embodies a vision of the future of European development aid.

«We need to establish true partnerships. Our partners in the developing world are calling us and they would like to see us support an inclusive growth agenda more, with particular focus on sustainable development, particularly energy, and a lot of interest in agriculture,” says Andris Piebalgs, European Commissioner for Development.

What Andris Piebalgs wants to see is a new model, to get away from the donor-recipient relationship, and help poor nations retake control of their growth, so that it meets their needs.

While the EU’s 27 member states are the world’s most generous aid donors, results are hard to come by, and are threatened further by the economic and financial crisis.

The European Commission has published a “Green Paper” outlining proposals and opening a debate about a future European development strategy. Europe’s citizens are invited to contribute their ideas; how to make aid more efficient, more equal, and more sustainable? How to ensure self-suffiency in food production?

NGOs are warning about sacrificing the poor’s basic needs on the altar of growth, and are demanding full transparency.

“We don’t even oblige companies and businesses in our countries to publish the money that they pay to developing country governments,” says the Brussels director of Bob Geldof’s NGO, One.

“It feels like growth could be an excuse for cutting back on the traditional areas of strength for European development cooperation, areas that we think are essential for actually inclusive growth, things like health and education, the

core rights for aided people to be able to have sustainable development, and we’re worried that a new focus on areas linked to the private sector could mean a reduced focus on those areas that we think are key.”

Development economists have revealed another weakness; the lack of trade between African nations. For example, Grace, despite being a success story, only exports to the rest of the world.

Donald Kaberuka is President of the African Bank of Development:
“The best way to move forward now is faster regional economic integration, for which you need to build infrastructure and then also facilitate trade and other forms of barriers. Exactly the same thing as Europe has done.”

The Green Paper consultations are open until the end of January. After that there will be time to think about the everyone’s contributions. The Commission then plans to publish its definitive proposals by the end of next year.