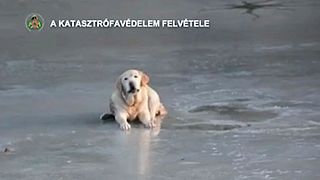 An ageing Labrador has been rescued from the middle of Lake Csunya in Pécel, Hungary.

The dog, named Marci, ventured onto the frozen lake but became trapped on a patch of very thin ice.

Divers from the country's National Emergency Response Service crawled out to him and dragged him to safety on an inflatable rescue sledge.

Marci was given a checkup and the vet said he had not suffered any long-term effects from his adventure.

The canine's owner later posted an update on Facebook, thanking the emergency workers and letting them know that Marci was doing well.