1997. What did our world looked like back in 1997? The international community was signing the Kyoto Protocol based on concerns over global warming and greenhouse gas emissions, while science introduced us to Dolly, the first cloned sheep. Princess Diana died tragically in a car crash under the Alma Bridge in Paris. At the same time, the first tome of Harry Potter’s adventures was released in bookstores.

As for the contemporary art world, it welcomed the Guggenheim Museum in Bilbao, in the Spanish Basque Country. A futuristic-looking (it still is) titanium building designed by Canadian-American architect Frank Gehry, in total contrast with the industrial landscape of this city. 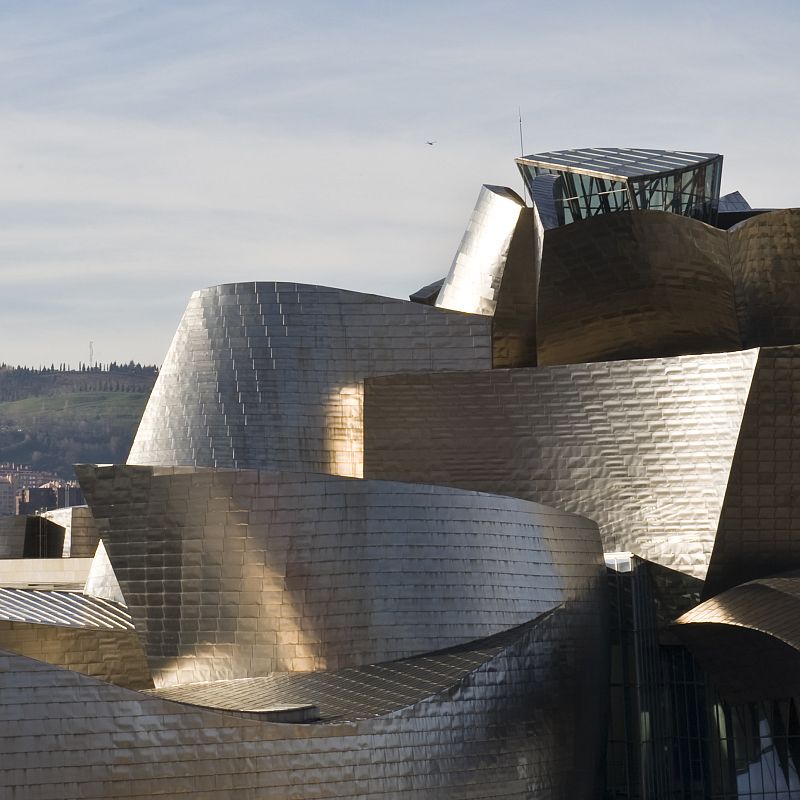 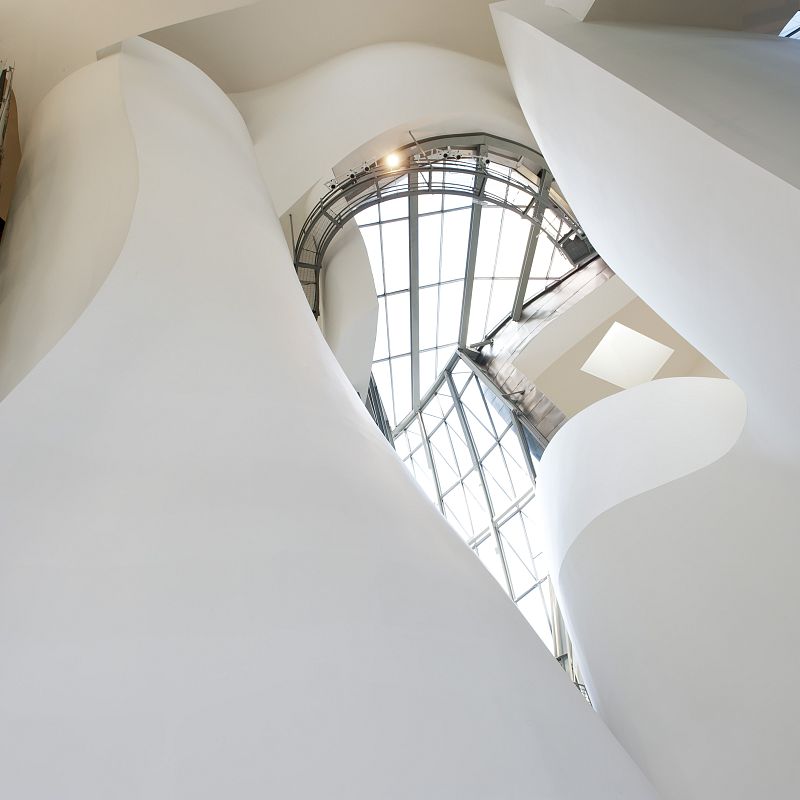 Originally based on the iron and steel industries and the naval sector, Bilbao experienced a severe economic crisis during the 1970s and 1980s, resulting in a high rate of unemployment and a significant deterioration in its environment, mainly a double pollution of its air and river.

But Bilbao has become a touristic hotspot in the space of only two decades, thanks to what is now called “the Guggenheim Bilbao effect”. Indeed, the museum is responsible for attracting 20 million visitors since the opening. A sudden attractiveness that is also due to the development of modern infrastructures skillfully cohabiting with vestiges of the past. A flourishing trajectory witnessed by the unflappable flower ‘Puppy’ by Jeff Koons, installed for the inauguration, still guarding the door. 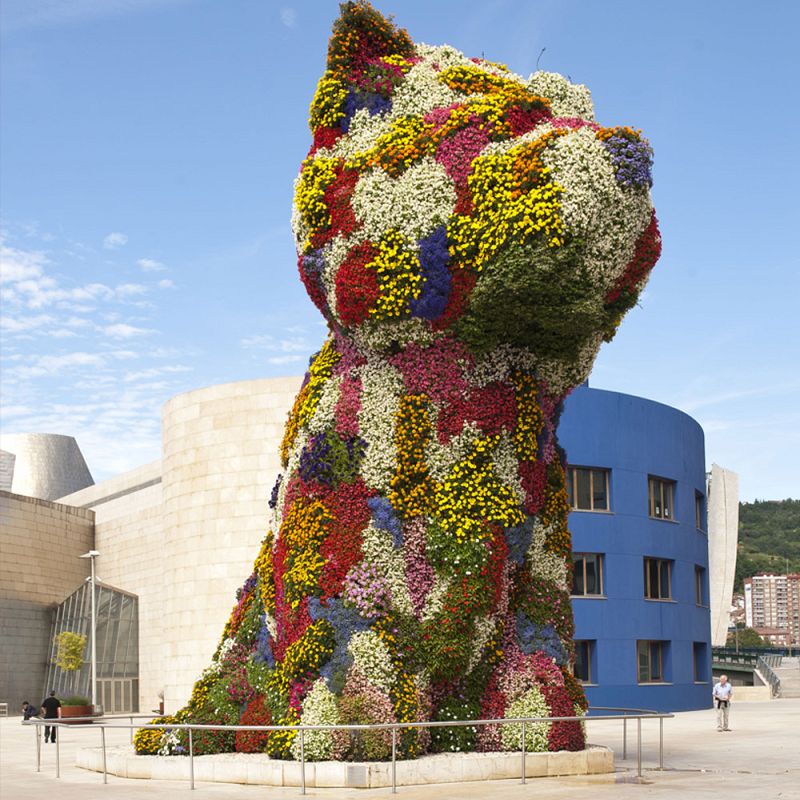 The Guggenheim celebrates its twentieth anniversary this month through Reflections, a spectacular sensory experience, blending sounds and lights, shown on the north-facing facades of the Museum. An artwork created by 59 Productions, a collective of artists and developers combining art and technology in large-scale video projections. Twenty minutes of ephemeral paintings referring to various elements of the Bilbao identity such as the white and red stripes of the local football team or the reproduction of a boat floating above the river (now clean). 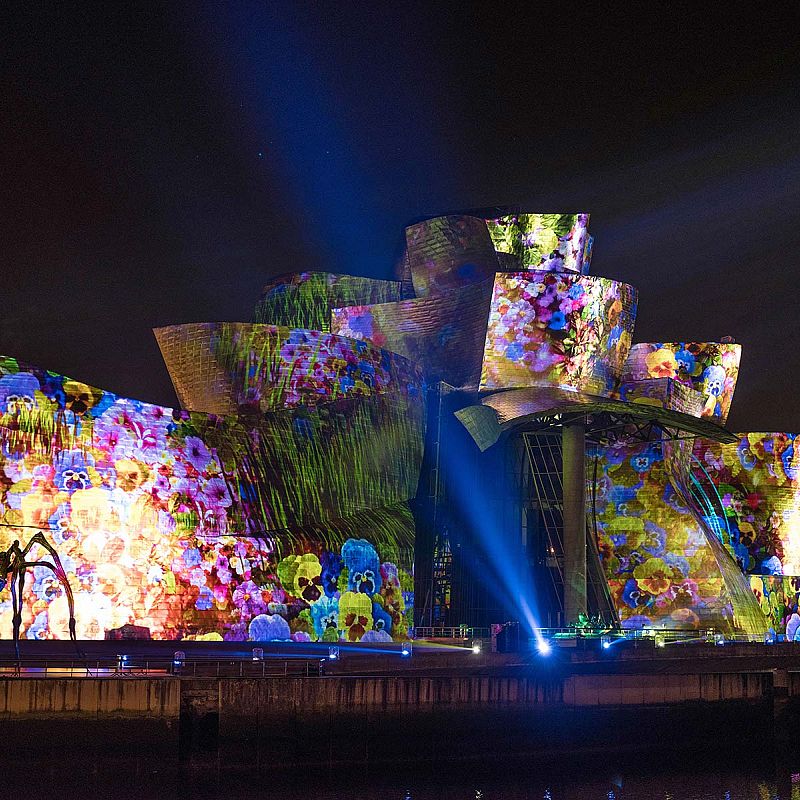 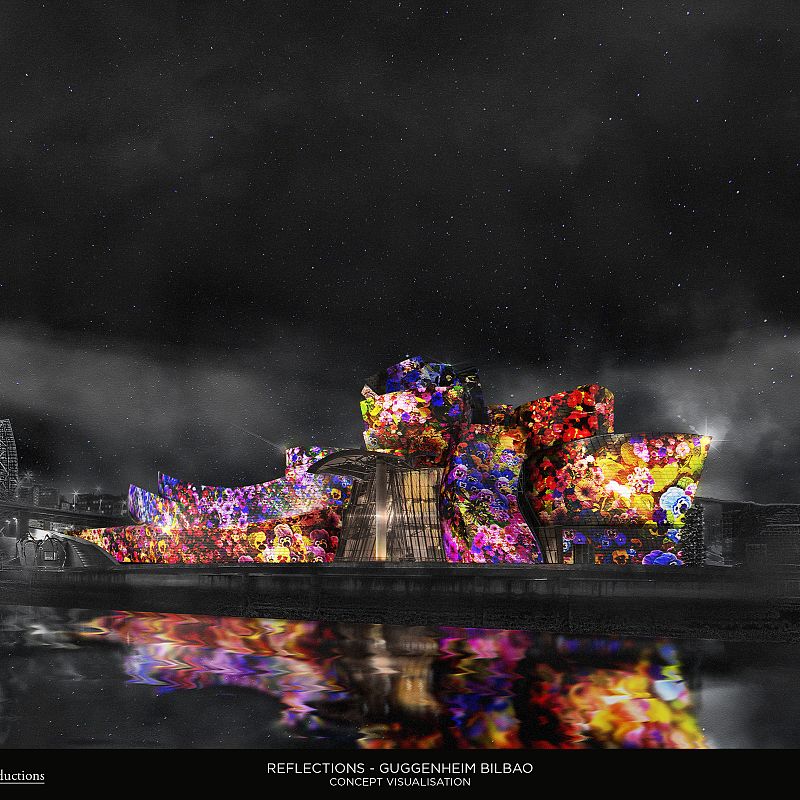 Reflections is also a tribute to the many masterpieces installed outside the Museum such as Maman by French artist Louise Bourgeois. This huge spider, usually motionless, gets awoken and stretches its monstrous legs on the Guggenheim’s façades for a brief moment. Enough to cause nervous laughter in the audience.

The Museum expects 200,000 people to watch the show from the other side of the river. “It was very important for us to hold an exceptional event to celebrate this anniversary and to share it with the people closest to us: the people of Bilbao, to whom we owe so much,” explains Guggenheim Bilbao director Juan Ignacio Vidarte, in a press conference.

Since 1997, crowds have flocked to discover the major exhibitions that take place every year. Among the most popular, Russia! in 2006 and Andy Warhol. Shadows in 2016. Each attracted more than half a million visitors. Currently, the Museum dedicates a retrospective to the filmmaker Bill Viola and exhibits the woven productions of Anni Albers.

One of the most remarkable works of the permanent collection is called The Matter of Time, commissioned by the American artist Richard Serra. It consists of seven different steel sculptures about 3 meters high, in the form of snakes rolled up on themselves or lying down in zigzag. The visitor is invited to walk inside them as a way to become aware of time passing by; time that seems shorter or longer, depending on each individual’s state of mind when isolated in a dark and narrow space.

Thus, the Guggenheim has blown a wind of change on Bilbao by bringing both creativity and innovation. A few steps from the Museum is Alhóndiga, a former warehouse built in 1909 where the rioja wines of the Basque country were preserved. The building retains its façade while the interior has become an ultra-modern cultural complex rehabilitated by Philippe Starck in 2010 and housing a library and cinemas. The bottom of the swimming pool on the last floor is visible from the ceiling in the entrance hall … and that is vertiginous!

The headquarters of the health department of the Basque country has a polyhedral facade surmounted by an oblique tower. The building’s surface is entirely covered with mirrors, shining a thousand lights on a bright day. This block of glass and steel designed by the architect Juan Coll-Barreu is a must-see for design lovers and any instagrammer. 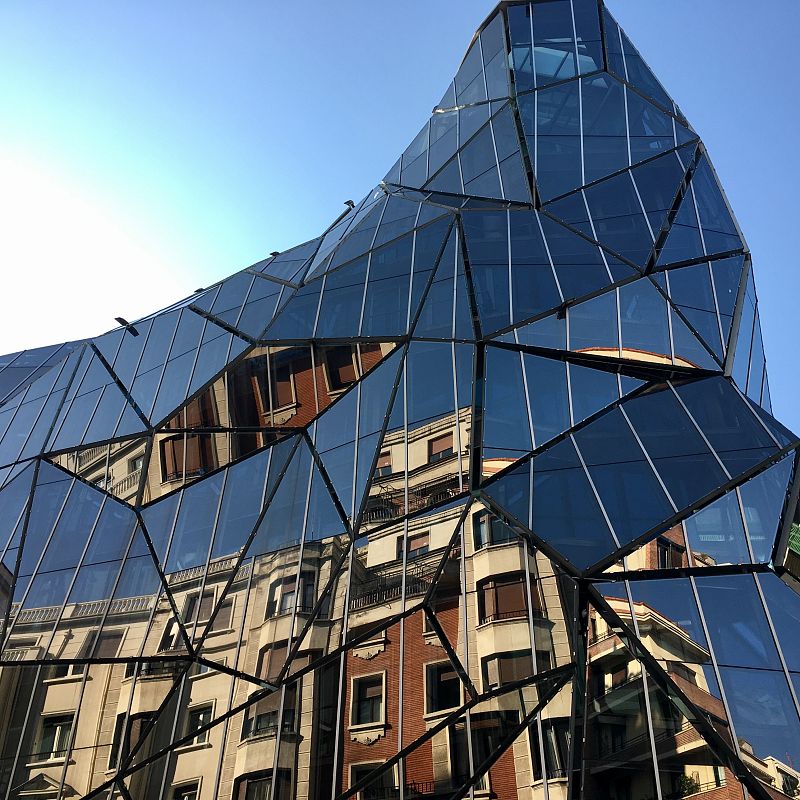 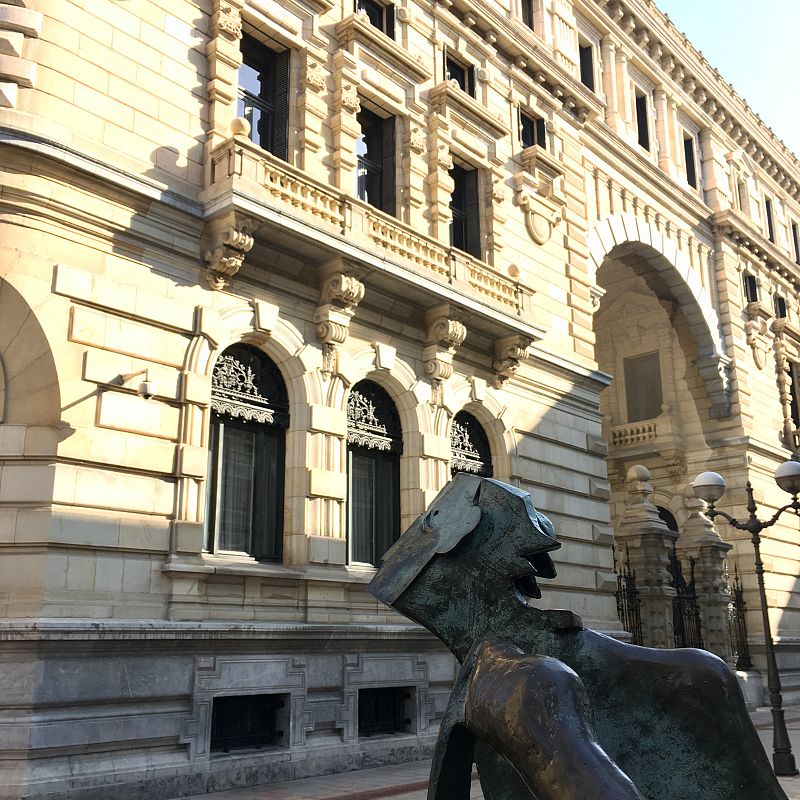 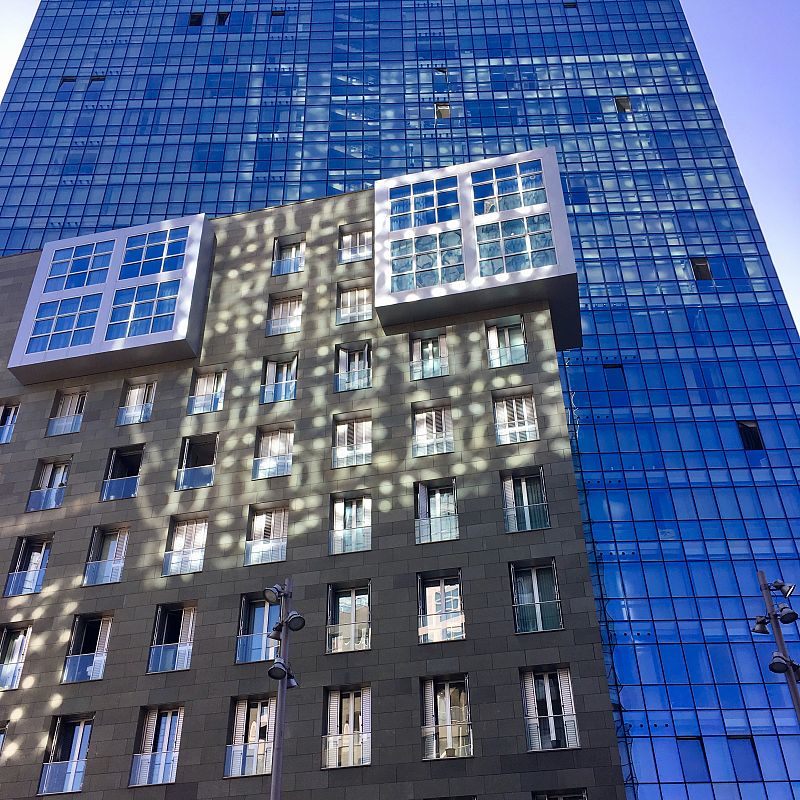 These contemporary elements coexist with the traditional architecture of Bilbao. The Carlton, first luxury hotel to open in the city in 1926, stands on the Federico Moyúa square with its white façade, perrons and symmetrical balustrades as the epitome of classic design. From the outside, one can see the ventilation holes of the place where the secret meetings of the Basque government took place during the Spanish civil war.

Plaza Nueva is a historical UFO with its architecture typical of the south of Spain. Its construction is only the result of diplomatic strategies. It is the ideal place to participate in the local tradition of pincho – which has nothing to do with tapas. In more than 200 bars throughout the city the tradition wants you to order a drink and choose a bite from a wide selection of small plates. A puzzle for the palate that usually ends up in a marathon, from one bar to another.

As the last Reflections lights fade out on the lines and curves of Frank Gehry’s building, the crowd disperses and leaves room for the next ones. The video will be screened seven times in a row during the four-day celebration and then finally extinguished. “Art changes everything” the slogan of the Guggenheim says. Twenty years later, the Museum has certainly changed Bilbao.

A lack of environmental protections is making it difficult for Europe to source its food sustainably.

Patagonia gets political with labels saying ‘vote the a**holes out’

The outdoor brand is taking a stand against leaders who "disregard the climate crises and ignore science."