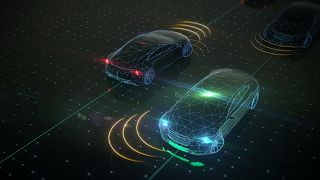 Electric self-driving cars are touted as an environmentally friendly alternative to conventional petrol-guzzling vehicles. But the computers that run them require energy.   -   Copyright  Canva
By Charlotte Elton  •  Updated: 18/01/2023

The computers needed to run self-driving cars could pose a serious threat to the environment.

Fossil fuel-guzzling cars spew out billions of tonnes of carbon dioxide. Their electric, self-driving counterparts are much more environmentally friendly - but they’re no silver bullet, Massachusetts Institute of Technology researchers have found.

To run autonomously, these cars rely on a vast computing infrastructure powering onboard cameras and operating driving algorithms.

If such self-driving vehicles are widely adopted, the computers powering them would generate as much greenhouse gas as all the world’s existing data centres currently do - roughly equivalent to 0.3 per cent of global emissions, or the total carbon footprint of Argentina.

Could self-driving cars be a major source of emissions?

Self-driving car emissions have the potential to be an “enormous problem”, warns the paper’s first author Soumya Sudhakar.

The research team used a statistical model to determine exactly how big this problem is.

There are currently more than 30 million driverless cars in the world. This number is projected to grow exponentially as companies like Tesla pour money into the development of such vehicles.

The model posited 1 billion autonomous cars, each driving for one hour per day with a computer consuming 840 watts.

The energy required to power the computers would emit more than 200 million tonnes of carbon dioxide per year.

To prevent such emissions from “spiralling out of control”, hardware efficiency needs to be dramatically improved.

“If we just keep the business-as-usual trends in decarbonisation and the current rate of hardware efficiency improvements, it doesn't seem like it is going to be enough to constrain the emissions from computing onboard autonomous vehicles,” says Sudhakar.

“But if we get ahead of it, we could design more efficient autonomous vehicles that have a smaller carbon footprint from the start.”

The researchers found that in over 90 per cent of modelled scenarios, each vehicle must use less than 1.2 kilowatts of power for computing to keep emissions from spiking.

If 95 per cent of the global fleet of vehicles is autonomous by 2050, hardware efficiency will need to double faster than every 1.1 years to keep emissions under those levels.

How bad are petrol cars for the planet?

This massive footprint still pales in comparison to the carbon footprint of petrol cars, however.

Transport accounts for around 30 per cent of global carbon emissions and 72 per cent of these emissions come from fossil fuel vehicles.