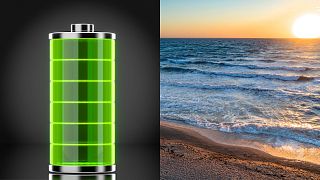 Researchers have made a breakthrough with ‘molten salt’ batteries, an alternative to lithium.   -   Copyright  Canva
By Charlotte Elton  •  Updated: 14/12/2022

Your electronics could soon be powered by an ultra cheap sea salt battery.

Researchers have built a new cheap battery with four times the energy storage capacity of lithium.

Constructed from sodium-sulphur - a type of molten salt that can be processed from sea water - the battery is low-cost and more environmentally friendly than existing options.

It could be a ‘breakthrough’ for renewable energy, according to lead researcher Dr Shenlong Zhao, from the University of Sydney.

“Our sodium battery has the potential to dramatically reduce costs while providing four times as much storage capacity [as Lithium],” he said.

“This is a significant breakthrough for renewable energy development which, although reduces costs in the long term, has had several financial barriers to entry.”

Why do batteries matter to renewable energy?

As the climate heats up, there is an urgent need to switch to renewable energy sources like wind and solar. But renewables are not always as consistent as other sources meaning batteries are needed to store this electricity for later use.

Many batteries are built with rare earth metals like lithium, graphite, and cobalt.

To achieve climate neutrality, the EU will require 18 times more lithium than it currently uses by 2030 and almost 60 times more by 2050.

But these metals come at a cost. Lithium extraction can result in water shortages, biodiversity loss, damage to ecosystem functions and soil degradation.

When the metal is produced using evaporation ponds, for example, it takes approximately 2.2 million litres to produce one metric tonne.

It’s also financially costly to mine at scale. This is where the sea salt battery could provide an alternative.

What are molten salt batteries and are they scalable?

Molten salt batteries aren’t a new concept. They’ve been around for 50 years, but they’ve been an ‘inferior alternative’ with a short energy life cycle.

But this new battery is different. Scientists altered the electrodes to improve the reactivity of the sulphur - a key element determining storage capacity.

Because sea salt is everywhere, it could provide a scalable alternative to lithium ion batteries.

“When the sun isn’t shining and the breeze isn’t blowing, we need high-quality storage solutions that don’t cost the Earth and are easily accessible on a local or regional level,” Dr Zhao said.

“Storage solutions that are manufactured using plentiful resources like sodium – which can be processed from sea water – also have the potential to guarantee greater energy security more broadly and allow more countries to join the shift towards decarbonisation.”

The researchers now plan to improve and commercialise the new cells.