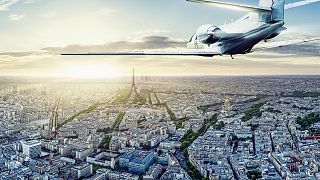 Paris to London journeys could soon be a thing for the past for jetsetters.   -  Copyright  Getty/frankpeters
By Lottie Limb  •  Updated: 05/12/2022

France has been given the green light to ban short haul domestic flights.

The European Commission has approved the move which will abolish flights between cities that are linked by a train journey of less than 2.5 hours.

The decision was announced on Friday. The changes are part of the country’s 2021 Climate Law and were first proposed by France's Citizens' Convention on Climate - a citizens' assembly tasked with finding ways to reduce the country's carbon emissions.

France is also cracking down on the use of private jets for short journeys in a bid to make transport greener and fairer for the population.

Transport minister Clément Beaune said the country could no longer tolerate the super rich using private planes while the public are making cutbacks to deal with the energy crisis and climate change.

France has officially been given the go-ahead to halt environmentally-damaging domestic flights.

When the measures were first announced, they were contested by the Union of French Airports (UAF) as well as the European branch of the Airports Council International (ACI Europe).

This prompted an in-depth investigation by the European Commission into whether the plan could go ahead or not.

A European Air Services Regulation article states that a member state may, "where there are serious environmental problems […] limit or refuse the exercise of traffic rights, in particular where other modes of transport provide a satisfactory service”.

It’s going in the right direction, but the initial measure is one that’s (not very) ambitious. We must go even further.

The Commission gave its approval on Friday making it the first time this article has been invoked by an EU member state.

The ban on short-haul flights will be valid for three years, after which it must be reassessed by the Commission.

"[This] is a major step forward in the policy of reducing greenhouse gas emissions," transport minister Beaune said in a press release.

“I am proud that France is a pioneer in this area,” he added.

Sarah Fayolle, Greenpeace France transport campaign manager, told Euronews that there were both “negative and positive aspects” to the European Commission’s decision given that only three routes are affected.

“It’s going in the right direction, but the initial measure is one that’s (not very) ambitious. We must go even further,” she said.

Which routes will be impacted by France's flight ban?

Initially, the ban will only affect three routes between Paris Orly and Nantes, Lyon, and Bordeaux where there are genuine rail alternatives.

If rail services improve, it could see more routes added including those between Paris Charles de Gaulle and Lyon and Rennes as well as journeys between Lyon and Marseille. They currently don't meet the criteria for the ban because trains to airports in Paris and Lyon don't allow passengers to arrive early in the morning or late in the evening.

Others - such as routes from Paris Charles de Gaulle to Bordeaux and Nantes - weren't included because the journey time is more than the 2.5 hour limit.

Connecting flights will also have to follow these new rules.

When will France's flight ban come into effect?

Although the law came into force last year, it will take a while for the ban to come into effect.

The measures need to be submitted for public consultation and reviewed by the Council of State, Beaune explained.

He added that this would be done "as quickly as possible."

Private jets have been a source of outrage lately, as the city-hopping exploits of celebrities and billionaires come to light. A jet belonging to Steven Spielberg burned around €117,000 worth of fuel in the two months since June, according to flight tracking data.

A report from Transport and Environment (T&E), the European federation for clean transport, found that private jets are up to 14 times more polluting than commercial flights per passenger mile, and 50 times worse than trains.

Despite urgent calls from campaigners, France is unlikely to impose a total ban on jets.

Government spokesman Olivier Véran reaffirmed today that it is "obviously not a question of banning them", given their important role in the economy. But “the French should not have to feel as if it’s always the same people who are being asked to make efforts".

“We can understand that a Frenchman who is careful in his daily life is shocked by the fact that some of his fellow citizens can take a private jet to make flea jumps”, he told France Inter radio listeners this morning.

Heavy taxation and restrictions are the most likely measures to be introduced. Companies could also be forced to publish details on their use of corporate aircraft, for greater transparency.

How does France compare to other European nations?

It’s for good reason that France is looking to curb the gas-guzzling age of air travel. The country has the highest number of private jets in Europe according to recent aviation data, with frequent fliers to Paris and the French Riviera.

A tenth of all departure flights in 2019 were by private jets, T&E research found, with half travelling less than 300 miles.

But the government also believes that EU-wide action is the best way to tackle the problem. Beaune said he would push the issue at an upcoming European transport ministers’ meeting in October.

"The Minister of Transport proposes to carry out a consultation at European level to see if there are ways to offset CO2 emissions,” added Véran.

France is also incentivising people to switch from cars to bikes

As part of President Macron’s plea for “collective sobriety” in energy use, French citizens are also being encouraged to trade in their cars for electric bikes.

A maximum of €4,000 is available to low-income households in low-emission zones to subsidise the switch, with smaller amounts to help wealthier citizens.

An extension to ‘Le Plan Vélo’ - launched last year - is intended to help the French catch up with the bike-loving Dutch, Germans and Danes.

The aim is to get 9 per cent of the country on two wheels by 2024, compared to the current proportion of 3 per cent (the Netherlands boasts 27 per cent cyclists).

France isn’t the only country getting things right in this regard, of course. The bike subsidy scheme is based on the hugely successful rollout of e-bikes, scooters and mopeds in Lithuania, where, since 2020, people have been given up to €1,000 for handing in their old vehicles. This can even go towards public transportation credits.

If you feel like trading your government in for a better model after reading the above, there’s plenty more inspiration to take from the way other countries are greening their transport here.