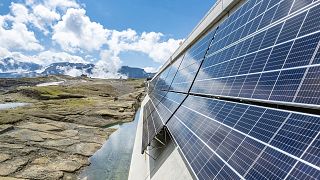 Travelling around Europe on a clear day, you’re increasingly likely to spy a sheet of solar panels glinting in the sun.

It’s a positive sign to most, if a recent survey showing that renewable energy is EU citizens’ favoured way out of the climate crisis is anything to go by.

But some politicians are still finding ways to cast solar fields in a bad light, within a wider trend of climate action being politicised. While still competing with Liz Truss to become UK prime minister, Rishi Sunak vowed that he would not see “swathes of our best farmland [lost] to solar farms.”

This is despite ground-mounted solar panels currently covering just 0.1 per cent of all land in the UK, well behind that dedicated to golf courses.

The full picture is much more varied. More and more solar panels are cropping up by roadsides, on reservoirs, and the disused land beside train tracks, as the Europe's energy landscape - and so its physical landscape - changes for the better.

As it must: by 2035, solar needs to grow ninefold to put the continent on a pathway compatible with 1.5C warming, according to clean energy think tank Ember.

We spoke to experts about which countries are leading the way, and what is needed for solar to play its part in the green energy transition.

Which European countries are doing the best on solar?

There’s a number of different metrics by which you can judge a country’s solar success.

Looking at the percentage of electricity generated by solar in the energy mix, the Netherlands, Germany and Spain come out on top, with 23 per cent, 19 per cent and 17 per cent respectively during summer 2022.

Greece is typically a top performer here too, recently celebrating generating 100 per cent of its electricity from renewables for the first time (albeit for only five hours).

The countries where solar is rapidly taking off tend to be smaller and concentrated in Eastern Europe. Poland has increased its solar generation since 2018 by a whopping 26 times, with Finland and Hungary also rolling the renewable out at pace.

Surprisingly, the leaderboard doesn't match up to which countries are the sunniest. Political backing and cultivating the right economic climate for solar is more important than ‘irradiance’ levels.

Even in the middle of Sweden, solar still makes sense.

“Photovoltaics [PV] is a technology which is applicable up to the southern half of Sweden,” explains Jonathan Bonadio, senior policy advisor at SolarPower Europe “Even in the middle of Sweden, it still makes sense, with the decrease of the cost of PV panels, and the overall cost reduction.”

It’s hard to compare like for like, however, with countries of such varied shapes and sizes. Luxembourg actually has the highest percentage of solar, notes Ember analyst Harriet Fox. But with less than 65,000 inhabitants it’s something of an anomaly.

Bigger countries also have the best auction results, with Germany, Spain and the Netherlands auctioning the largest quantities of renewables.

SolarPower Europe, a member-led association for the continent’s solar PV sector, adds that ‘gigawatt countries’ are the real contenders. These are the nations that have installed at least one gigawatt of solar - equivalent to a nuclear reactor, and capable of powering around 300,000 homes.

Denmark is also on this list, and it’s hoped that Norway, Italy, Sweden and Belgium will qualify soon.

What are the UK and EU rules on ground-mounted solar?

“Solar is such an easy way to fix the energy crisis or reduce it,” Fox tells Euronews Green. “Especially for next winter - which people are already saying is going to be even more testing than this one, because we'll probably have run through our gas reserves.

“You could easily get a solar park up and running in a year, if you have the political and social and environmental acceptance.”

In the UK, Tory politicians were recently considering a backwards step: widening the scope of ‘best and most versatile’ land - earmarked for farming - to include lower grade land where most solar farms are built on and planned for.

The designation of land, whether for agricultural or industrial use, is usually a member state matter on the continent. REPower EU, the bloc’s plan for weaning itself off Russian fossil fuels, requires countries to identify ‘go-to’ areas where renewable projects can be launched with quicker permitting processes.

SolarPower EU prefers the term ‘priority’ areas (which doesn’t carry the same association of ‘no go’ zones). But the message is clear; “the lower hanging fruits currently lie on degraded areas or places of low biodiversity that were under intensive agriculture, or parking areas,” says Bonadio.

How is Europe’s land and water-scape getting the solar treatment?

Agonising over the trade-off between fertile land and solar sites is pretty unimaginative, given all the new and emerging options out there. Not least agrivoltaics - the practice of using land for both agricultural and solar energy generation. Panels can provide shade to protect crops during heatwaves, for example.

Germany and France have several projects that demonstrate this dual use. And a new report from SolarPower EU details how biodiversity can be boosted on these sites, starting with a stocktake of species on previously intensively farmed fields.

Roadsides are starting to get a solar makeover. Panels are being installed on noise barriers in the Netherlands and Switzerland, where plans for solar highways could generate as much as 55GW of output.

Railways are getting the solar look too, and not just on adjacent wasteland. Germany’s national train company Deutsche Bahn is experimenting with adding solar cells to the sleepers on the tracks. If rolled out across the whole 60,000km long DB network, the British company behind the scheme estimates it would generate the equivalent power of five nuclear power plants.

Old coal mines are another prime spot for solar; they’ve been getting a new lease on energy life from Poland, Romania and Bulgaria to Spain.

Then there’s ‘blue’ solar; the reams of panels that are placed on natural and artificial bodies of water. Portugal now has the largest floating solar park in Europe, four football pitches long on the Alqueva Reservoir. It dethroned Lightsource BP’s Queen Elizabeth II Reservoir project earlier this year.

“The economics of solar floating PV are a bit more expensive, per unit of energy generated to build on lakes and reservoirs,” explains Bonadio. And there’s other water users, like those using a lake for leisure, to consider too. “So I won't say that floating PV is the new gold mine. It's one area of prospect but it comes with a whole package, with industrial and other areas.”

We have very good examples of solar PV that can be used as a reef for endemic species in order to develop.

Even on the water’s surface, solar panels can make a positive contribution to the ecosystem, he adds. “We have very good examples of solar PV that can be used as a reef for endemic species in order to develop.”

Bomhofsplas Floating PV plant, located on a reclaimed industrial sandpit near Zwolle in the Netherlands, is a prime example of this. It has installed 20 ‘biohuts’ at the edges of the floating plant, acting as nurseries for small fish and aquatic microorganisms.

Early studies already show an increase in the number and diversity of species in the area below the floating PV plant. Different species of fish, mussels and sponges were discovered, with a good balance between predator and prey species.

It’s time, rather than space, that presents the biggest challenge in boosting Europe’s solar capacity.

Under the Commission’s REPower EU initiative, we have to install as much solar as was installed in the past 20. This, he thinks, is technically feasible. But it means we have to double our solar capacity by 2025, and quadruple it by 2030.

That means speeding up the permitting process which, though quicker than that for wind, still exceeds the EU limit of two years in most countries. Solar groups are calling for this to be simplified as a priority.

The grid connection permit is one big hurdle at the end of this process. “Currently, the grid operators at EU level have still failed to plan for a future when we are running on 100 per cent renewables,” says Bonadio.

And human power is another key part of the equation. “You can have the most streamlined procedures on paper,” he adds, “but if you don't have enough staff, you will not be able to follow up.”

It’s on this issue that SolarPower Europe is hoping to connect with many of the young attendees at COP27, hoping to get the younger generation skilled up.

And there’s a core bit of negotiating to be done too. While the European Parliament and Commission are set on achieving 45 per cent renewables by 2050, some member states are pushing for a lower 40 per cent target.

The upper end “is the most cost efficient way to climate neutrality by 2050. And it’s also the only way to keep 1.5C alive,” argues the association’s Bethany Meban.

“We want to make sure we land that 45 per cent goal by Christmas.”