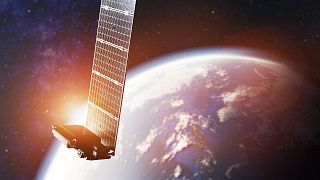 A massive solar space farm could provide as much energy as a nuclear power plant, the European Space Agency has said.   -  Copyright  Canva
By Hannah Brown  with EBU  •  Updated: 22/11/2022

It sounds like the stuff of science fiction but Europe might one day be powered by giant floating solar panels orbiting the Earth.

The European Space Agency (ESA) has unveiled a plan to harvest the sun’s energy in space and beam it back down to Earth.

The technology is still in the preliminary testing phase but the end goal is a 2km long solar space farm, generating as much energy as a nuclear power plant.

The ESA is trying to move the project forward at it Minsterial level meeting in Paris today and tomorrow.

“[Such a project] would ensure that Europe becomes a key player - and potentially leader - in the international race towards scalable clean energy solutions for mitigating climate change,” the ESA said in a statement.

How will the space farm technology work?

Solar power is one of the best sources of clean energy, but it’s currently held back by a few limitations. Panels can only harness power in the daytime and, even then, much of the sunlight is absorbed by the atmosphere on its journey to the ground.

In space, the sun’s beams are around ten times as intense as they are on Earth.

The ESA has partnered with Airbus - a European multinational aerospace corporation - to develop ‘wireless power transmission’ to capture this 24-hour source of electricity and beam it down to us.

The technology is based on the transmission used by TV and communication satellites every day, Airbus engineer Nicolas Schneider explains.

"We are not very far from a 4G antenna, except that what we want is not to radiate in all directions, we want to be very precise like a laser, in fact,” he says.

“It’s a wave that can be directed to this receiving antenna which will then transform this wave into electricity."

The problem is scale. The satellite would have to be massive, likely several kilometres across, making them difficult design, build and launch.

But with technology evolving rapidly, the project could be a reality in coming decades.

The satellite would be repaired by robots while in orbit, explains Gwenaëlle Aridon, hHead of the Robotics Laboratory at Airbus Defence and Space.

"The robot will be able to come and repair a panel, remove it and put a new one on if necessary,” she said.

“Having [robot] manipulators reboot arms would effectively reduce the cost of the operations that are carried out.”

It may be a logistical challenge - but as energy crises shift and unfold, it could eventually be a game changer.

A single solar power satellite of the planned scale would generate around two gigawatts of power, equivalent to a conventional nuclear power station or six million solar panels on earth.

The resulting energy could power more than one million homes.