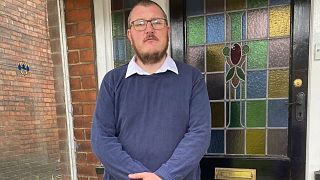 Hundreds of thousands of Brits are set to stop paying their energy bills next month when prices take another leap.

More than 1.7 million UK households are planning to strike on payments from 1 October, according to a recent Opinium Research survey, representing 6 per cent of the population.

That was before new PM Liz Truss took office last week with the announcement that energy bills will be frozen at an average of £2,500 (€2,886) a year.

Gas and electricity regulator Ofgem previously said it would lift the price cap - the maximum amount suppliers can charge customers - by 80 per cent, letting the average annual bill soar to £3,549 (€4,198).

While Truss’s plan offers some protection to worried citizens, the roughly 27 per cent hike in the ‘price guarantee rate’ makes average bills 97 per cent higher than they were before April.

Will people still strike on energy bills despite Truss’s freeze?

7 million households across the UK are still heading into fuel poverty this winter, the End Fuel Poverty Coalition estimates, on track to spend more than 10 per cent of their income on energy.

Against this stark backdrop, more than 188,400 people have so far pledged to stop paying their energy bills in October.

The campaign is aiming to convince one million people that a collective non-payment strike is the best way to force the government and energy giants to rethink.

We spoke to some of the local organisers trying to make that happen.

Who is taking part in Don’t Pay?

When Sheila*, 39, went from door to door on the high street in Sheffield last month, she was struck by the fact that everyone - from charity shop volunteers to librarians, business owners, baristas and walkers-by - at least took a leaflet.

“Even if they didn't agree with the ‘Don’t Pay’ premise or they had questions about it, every single person was really, really worried about their bills,” she says.

“Many people say that they already can't afford them… The librarian told us that people are already using the library to stay warm and she's really afraid of what's going to happen this winter.”

Each year, around 10,000 people die as a result of living in freezing homes according to the National Energy Action (NEA) charity - from heart attacks, strokes, bronchitis and other serious illnesses that the cold causes or exacerbates.

With UK families set to face gas and electricity bills far higher than anything experienced since the 1970s, the impact on people’s health and wellbeing will be even starker this year.

Businesses are closing due to soaring energy bills

As a small business owner herself, Sheila (who didn't want to use her real name) is also concerned about the impact of bill hikes on her sector’s “fragile ecosystem”. In the UK, 99 per cent of businesses are classed as ‘small’ - those employing less than 50 people - but 75 per cent of them are run by just the owner.

“A recession is already predicted, but how bad is it going to be?” she wonders.

The UK papers are full of shops and restaurants being forced to close down because the soaring energy bills have already made them unprofitable.

Though Sheila could cope with the higher bill in October, at least for a few months, she is striking in solidarity for the people who can’t pay now - and strategically.

“Rather than have hundreds of thousands and millions of people unable to pay at different times, if we can stand up and all pledge at the same time, that will send a really strong message that we need a more reasonable price,” she says.

“We have to stand together to make sure that we're not just open to naked profiteering.”

Is civil disobedience the solution?

Lewis Ford, an organiser from Hull, agrees the movement is “a lot about solidarity”, especially for those forced to choose between heating their home and feeding their family.

“We’re already talking about the idea of setting up warm banks, which is an absolutely preposterous idea,” the 31-year-old IT consultant tells Euronews Green. “We're one of the richest nations. So, it’s not like there’s no money, it’s the fact that the money is being kept in one space.”

Energy giants have seen their profits skyrocket, with BP raking in €8.2 billion between April and June - more than triple the amount it made in the same period last year - and Shell posting a record €11.3 billion profit in July.

Meanwhile National Grid, the company controlling the UK’s gas and electricity lines, reported a 107 per cent rise in annual pre-tax profits in May. And British Gas owner Centrica has increased its profits fivefold over the last year.

“I just kind of got to the end of my tether,” says Lewis of his decision to sign up. Three years away from the next general election, with the government cracking down on protest, “civil disobedience is one of the last things we're able to do.”

“Not only has taking to the streets proven to be almost completely ignored by this government,” adds Lewis, “it’s the energy companies that are making a profit off of us, and so it makes sense to me to hurt their profits.”

Like many Don’t Pay advocates, he looks back to the Poll Tax protests of the late 80s and 90s as an example of a successful non-payment movement that scrapped an unpopular policy.

We’re a scrappy bunch, we tend to stick up for ourselves.

Hull has some of the highest rates of fuel poverty in the UK, so the response to the campaign has been positive, says Lewis. “We’re a low-income town, a post industry town, we’ve got a lot of people from poorer backgrounds who have been struggling throughout the last 12 years and beyond. We’re a scrappy bunch, we tend to stick up for ourselves.”

Though he’s concerned about taking action, the dad of two says he’s more worried about what will happen if he doesn’t, and bills continue to rise. “Ok I might get into debt, but I’m going to get into debt anyway. I’m not going to be able to continue paying these bills, and neither are many other people.”

What can happen if you don’t pay your energy bill?

Concerns about joining the movement aren’t unfounded. “It’s important to know there can be serious consequences if you build up arrears,” says Gillian Cooper, head of energy policy at Citizens Advice.

Your energy supplier can move you onto a prepayment meter or, in rare cases, even disconnect you. Not paying bills can also damage your credit rating, making it harder to borrow money in the future.

Cooper advises that, “If you’re unable to keep up with payments, there are rules which mean your energy supplier has to help you. If you talk to them they might be able to offer emergency credit or a more affordable payment plan.”

The charity recognises that many people are simply running out of options, however. “We hear from people every single day facing desperate choices because they’re struggling to pay their energy bills,” says Cooper. “This campaign is yet another indicator of the pressures people are under. The government must act again and provide more financial support so people can cope with spiralling costs.”

What we want to do is pay bills that don't completely immiserate us.

Don’t Pay UK organisers are sensitive to the different situations people might find themselves in. “I think it is going to be up to every individual to decide to what point they can take it,” says Sheila, noting there are several steps before suppliers can impose penalties - and only after 28 days have passed.

“Most of us want to pay our bills. I don't think anyone wants to go on some indefinite strike,” she says. “What we want to do is pay bills that don't completely immiserate us, plunge us into fuel poverty, prevent us from saving for the future.

“A lot of the conversation has been around the most dire possible consequences, when actually what we're saying is ‘Let's not let it get to that point; let's advocate for a fairer system’.”

How does the UK fuel crisis compare to what’s happening across Europe?

The UK is far from the only European country to be gripped by energy issues following the post-COVID rebound and Russia’s invasion of Ukraine.

It is less vulnerable than Germany, for example, when it comes to the actual supply of gas. But the way the UK energy market is configured is plunging Brits further into a cost of living crisis.

The country is acutely exposed to high gas prices, CarbonBrief analysis shows, as 85 per cent of households use gas boilers to heat their homes and around 40 per cent of electricity is generated in gas-fired power stations.

Combined with this, the UK has the only fully-privatised grid system in Europe outside of Portugal (where the government was forced to sell its stake during the country’s 2011 bailout).

While this might once have enabled consumers to shop around for the best prices, there are no better prices to be had any more, and the price cap system that was first introduced in 2019 to protect households from fuel poverty has proved far from a rigid defence.

This means that UK households are facing a 215 per cent rise in average energy price changes from 2021 to 2022 - the highest on the continent - compared to 23 per cent in Germany and 4 per cent in France.

While France’s state-owned electricity provider EDF is on track to be fully renationalised, across the channel its British arm raised rates by 54 per cent in line with the April price cap rise, and saw its profits rise by 200 per cent on the previous year.

In this light, it’s hardly surprising that some organisations are redoubling their calls for public ownership of the energy system. Don’t Pay UK, with its single issue focus, is not among them.

But Mat Lawrence, director of UK-based think tank Common Wealth, says the “desperate action” of those willing to cancel their direct debits this autumn shows that more must be done.

“Our leaders need to wake up to the scale of this crisis,” he says. “This is why we need urgent and radical action to protect living standards and keep the lights on this winter. The case for freezing energy bills and taking the energy system into public ownership is clearer than ever.”

'Summer of discontent': Soaring inflation fuels strikes in the UK