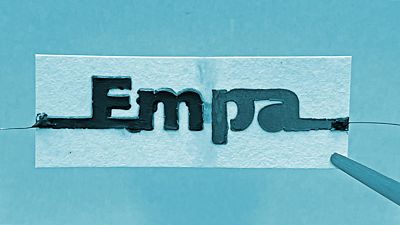 Researchers have developed a paper battery with a water switch that could be used to power single-use disposable electronics.

The team at the Swiss Federal Laboratories for Materials Science and Technology (EMPA) tested the paper battery by attaching two of them to the digital display of an alarm clock.

After being activated by two drops of water, it started working in 20 seconds and continued to consistently power the display for an hour until it started to dry up. The paper power source achieved a maximum stable voltage of 1.2 volts compared to the 1.5 volts produced by an AA battery.

What could the paper battery be used for?

Once they iron out some kinks in the development, it could be used for smart labels to track objects like packages. Other applications include environmental sensors or even medical devices, the researchers say. But even without tweaks to prevent it from drying out, the water switch could be useful for detecting moisture.

Because paper and zinc are biodegradable, they believe the battery could help reduce the environmental impact of single-use electronics.

“What's special about our new battery is that in contrast many metal air batteries are using a metal foil that is gradually consumed as the battery is depleted," says co-author of the study, Gustav Nyström.

“Our design allows us to add only the amount of zinc to the ink that is actually needed for the specific application.”

How does the paper battery work?

To make the battery, the team started with a strip of paper that had been dipped in salt water and then left to dry.

Ink containing graphite flakes was printed onto one side of the strip to make the positive terminal of the battery. On the other side, ink with zinc powder was used to make the negative terminal.

Both sides of the paper were then printed over with a mixture of graphite flakes and carbon black (like the soot on charred vegetables) to connect the negative and positive sides.

When water is added, the salt dissolves and releases charged ions. At the negative terminal, these ions make contact with the zinc causing it to oxidise (the same process that causes metal to rust) and release electrons.

An electrical device connected to the paper battery then completes the circuit meaning the electrons can flow from the negative terminal to the positive one through the device. Here they are discharged into the air.

Altogether this process generates an electrical current that can be used to power an electronic device.