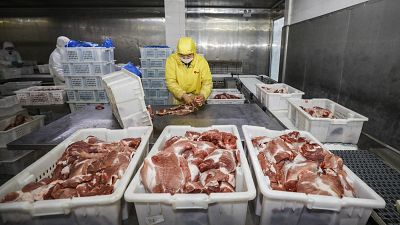 Microplastics are now being found in the meat and dairy we eat every day, according to a new study.

A report by environmental non-profit, Plastic Soup Foundation, reveals that 73 per cent of the products they tested contained microplastics - the material left behind when plastics decompose.

The research points to plastics being present in livestock feed as a possible cause of the contamination.

Scientists at Vrije Universiteit Amsterdam detected plastic particles in 18 of 25 milk samples tested in the Netherlands.

Some seven out of eight beef samples were found to contain plastic particles, while five of the 8 pork samples contained particles of at least one type of plastic.

Livestock feed was also tested. All of the 12 samples of feed pellets and shredded feed contained microplastics.

This research is on top of tiny particles already having been found in human blood, lungs and even in unborn foetuses - but the new study is sparking even more serious concerns about contamination in the food chain.

Animal feed is the main cause of contamination

The Amsterdam research team believes microplastics in feed pellets is one of the possible exposure routes through which plastic particles reach the bodies of animals. Other possibilities are through the water they drink and the air they breathe.

And this only adds to growing concerns over all the things farm animals are contaminated by. In 2021, an American farm worker called Emmanuel Moore was fired after he posted a TikTok video revealing how plastic waste was allowed to contaminate pig feed.

“Animals are able to absorb at least some of the plastic particles they are exposed to in their living environment,” says eco-toxicologist Dr Heather Leslie, co-author of the study.

“This study should act as an impetus to further explore the full scope of exposure and any risks that may be associated with it.

“The production of plastic-free feed for animals may be one of the ways to improve the plastic particle exposure scenario for livestock.”

Detecting plastic particles in a small number of samples like this provides data that can be viewed as a starting point for larger scale studies.

The ultimate aim is to be able to show the range of concentrations of plastic particles in modern-day livestock feed and thus be able to find out which farm animals consume it.