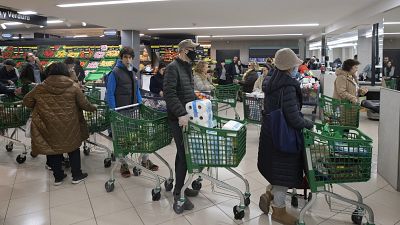 More than 1000 tonnes of food is wasted in Spain every year, especially at supermarkets.   -   Copyright  Paul White/Copyright 2020 The Associated Press. All rights reserved
By Rosie Frost  with EBU  •  Updated: 13/06/2022

An ambitious draft bill to cut food waste has been approved by the Spanish government.

All companies involved in the production and supply of food must plan to reduce waste or they could face fines of up to €60,000 - and up to €500,000 for repeat offenders.

The government is aiming to massively reduce the 1,300 tonnes of food wasted every year in Spain - 31kg per person according to data from 2020.

Nearly 1 billion tonnes of food is wasted each year around the world, according to a recent report from the UN. This would fill enough 40-tonne trucks to circle the globe seven times.

After analysing data from 54 different countries, every single one was found to have a substantial food waste problem, regardless of their national income.

Now Spain is hoping to play its part in tackling this global issue.

How does Spain plan to cut down on food waste?

“Ethical because, in a world where hunger and malnutrition unfortunately still exist, this issue is obviously a matter of conscience for all of us," he explains.

In bars and restaurants, all citizens should have the free right to take back any leftovers that have not been consumed.

Planas added that the law addresses all elements of the food chain, from harvesting all the way through to restaurants, supermarkets and individuals.

“In the catering sector, in bars and restaurants, all citizens should have the free right to take back any leftovers that have not been consumed and can therefore be consumed at a later date.”

This means free doggy bags that customers can take home with them if they don’t manage to finish their meal - a practice that isn’t currently common in Spain.

Also included in the bill are measures that will force supermarkets and restaurants to work with local organisations like food banks. Bigger businesses will also have to submit plans for donating food before it passes its best before date, as a priority.

When items are no longer safe for human consumption, the government has said they should first be used for animal feed and then for other industries such as the production of biofuels.

For individual citizens, the government has acknowledged that much of the problem occurs in homes. Across the EU, 53 per cent of all food waste is thought to happen at the consumer level.

Instead of fines, however, Spain is relying on educational campaigns to change domestic behaviour.

Is this the most ambitious food waste law in Europe?

The only other countries in the EU that currently have similar regulations to reduce food waste are France and Italy.

In 2016 France became the first country in the world to ban supermarkets from throwing away or destroying unsold food. Over the years more regulations around waste have been added, including similar bills to those coming into place in Spain. France also aims to reduce food waste by 50 per cent by 2025.

Italy has also introduced requirements for companies at each step of the food supply chain to reduce waste. It too has a strong focus on donating or distributing unsold products, incentivising companies to take part with tax breaks rather than fines.

Now Spain’s draft bill has been adopted by the government, it will need to be approved by parliament. If successful, the new law could be in place by early 2023.