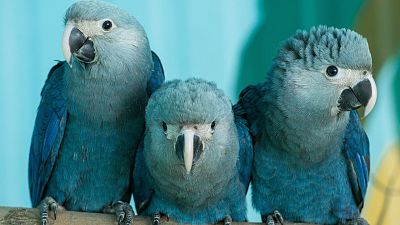 Three young Spix's macaws are pictured in the Berlin organization Association for the Conservation of Threatened Parrots.   -   Copyright  Patrick Pleul/AP
By Doloresz Katanich  with EBU  •  Updated: 03/06/2022

It's been 20 years since the last Spix's Macaw has been seen in the wild, but the near-extinct species could be set to make a comeback.

In a few days, the bird will be reinstated in a reserve, located in Caatinga in northeastern Brazil, thanks to a breeding and rehabilitation program.

The Spix's macaw, one of the rarest birds in the world, is a small parrot with blue feathers. Illegal trade, hunting and the destruction of its natural habitat by agriculture and other animals have left their mark and led to the disappearance of the species in the wild.

However, this could be about to change thanks to ACTP, a German NGO dedicated to the protection and conservation of threatened parrots and their habitats, which has teamed up with the Pairi Daiza Foundation and the government of Brazil for the re-introduction programme for the Spix's Macaw.

For years, ACTP and Pairi Daiza Foundation have worked relentlessly to breed a new population of Spix's Macaws bringing their number up to 180 healthy birds.

In the Pairi Daiza zoo in Belgium, 8 Spix macaws are kept in aviaries not accessible to the public.

“In two weeks, normally, we will release the first eight Spix in the wild after 22 years of absence in their habitat," said zoological and veterinary director at Pairi Daiza zoo Tim Bouts.

If the experiment is successful, the Spix macaw will be the first bird species reintegrated into the wild by humans.