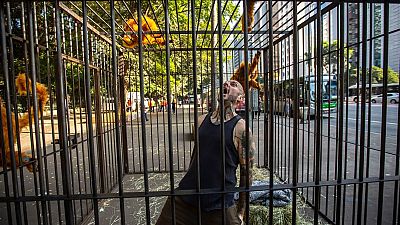 Three shocking art installations have opened on the streets of São Paulo, Brazil that ask the public to think about animals imprisoned for entertainment.

They are the work of artist Eduardo Srur and are made with plastic remains and cages. Each piece seeks to show the relationship between humans and animals, denouncing the "eternal confinement" to which they are subjected in zoos.

Brazil is the country with the highest rate of wildlife trafficking on the planet.

"The idea was born during the pandemic," says the artist. "We felt for ourselves how difficult it is to be confined, we lost the right to come and go.

“So why do we still treat animals that way? Why do we leave them imprisoned in cages and aquariums for human entertainment?"

What do Eduardo Srur’s works of art look like?

One of the pieces, installed in Parque do Povo is built with more than 1,000 cages seized by the Federal Police in operations against wild animal trafficking

Another, called 'Aquarium', has been installed in front of the Ibirapuera Park lake. It features a blue tank with 30,000 litres of water which is overlooked by a model of a polar bear. Inside it is filled with plastic waste and realistic sculptures of children looking desperately at the outside world.

This installation also tackles the problem of global warming caused by fossil fuels and the overuse of plastic, which pollutes the oceans and suffocates marine life.

The third, perhaps most shocking work of art is an enormous cage set up on the busy Paulista Avenue. Life-like monkeys hang on the outside a cage looking in on a human actor.

"Brazil is the country with the highest rate of wildlife trafficking on the planet," Srur explains.

"There are almost 40 million animals that are removed from their natural habitat to be sold and traded. This is a crime and it has to stop."

The artist says his eight-year-old daughter was one of the inspirations behind the project which he hopes will change the view of the relationship between humans and animals for future generations.

The installation 'Free Life' is open until the 2 June.

Watch the video to see the art installations.