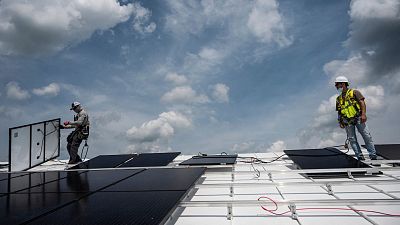 The European Commission is hoping to jumpstart a large-scale rollout of solar energy and rebuild Europe's solar manufacturing industry.

The plan is part of its bid to wean countries off Russian fossil fuels, according to a draft document seen by Reuters.

"Solar electricity and heat are key for phasing out EU's dependence on Russian natural gas," the Commission said in the draft, due to be published next week in a package of proposals to end the European Union's reliance on Russian oil and gas.

Solar photovoltaic (PV) costs have plunged by more than 80 per cent over the last decade, but the technology produced only 5 per cent of EU electricity in 2020. Solar's share in heat production was even lower, at 1.5 per cent.

Solar costs have plunged by more than 80% over the last decade, but the technology produced only 5% of EU electricity in 2020.

How would more solar rooftops speed up the energy transition in Europe?

The scheme would require the EU and national governments to take action this year to limit permitting times to three months for rooftop installations.

It would push countries to use EU funding and launch support programmes for rooftop panels, and install solar energy in all suitable public buildings by 2025.

Another EU scheme would bring together governments and training providers to focus on upskilling solar sector workers, while an "EU Solar Industry Alliance" would use the bloc's budget and carbon market "innovation fund" to support investments in manufacturing.

Europe has around 14 planned solar component manufacturing projects, but some need billions of euros in financing to launch.

It would bring together governments and train providers to focus on upskilling solar sector workers.

China supplied 75 per cent of EU solar panel imports in 2020. Europe has struggled to compete with its own large-scale factories, despite the EU imposing anti-dumping and anti-subsidy controls on solar panels from China between 2013 and 2018.

"The solar turnaround has never been tackled in concrete terms," said EU Green lawmaker Michael Bloss, who alongside countries including Austria, Lithuania and Spain, has called for Brussels to tackle the issue with legal tools, rather than voluntary schemes. For example by legally requiring new buildings to have solar rooftops on flat roofs, public buildings and supermarkets across Europe.

A separate draft document, seen by Reuters, would tweak EU law to fast-track permitting deadlines for some renewable energy projects.