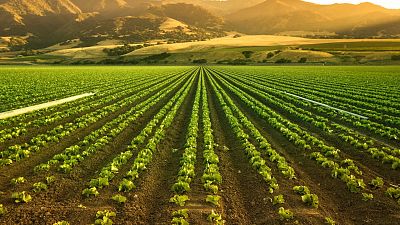 Urine spread on crops yielded good results according to the chamber of agriculture in France.   -   Copyright  Canva
By Doloresz Katanich  with AFP  •  Updated: 01/05/2022

French researchers think they may have found a unique natural alternative to chemical fertilisers. Their discovery reduces environmental pollution and helps to feed a growing global population, all thanks to an unexpected ingredient - human urine.

Synthetic nitrogen fertilisers boost agricultural production but if used in excess, they pollute the environment. Their prices are also soaring, especially now with the war in Ukraine. It has left scientists searching elsewhere for a solution to this combination of crises.

What are scientists replacing chemical fertilisers with?

To grow, "plants need nutrients, nitrogen, phosphorus and potassium," explains the engineer and coordinator of the OCAPI research program. When we eat, we ingest these nutrients before "excrete them, mostly through urine."

For a long time, urban excrement was used in agricultural fields, before being replaced by chemical fertilisers.

But when these nutrients are released in large quantities into rivers, they are one of the main sources of pollution.

Separating and collecting the urine at the source means rethinking toilets, the wastewater collection network - and overcoming certain preconceived ideas.

The separation of urine from toilets was first tested in Swedish eco-villages in the early 1990s, then in Switzerland or Germany. Experiments are now also being carried out in the United States, South Africa, Ethiopia, India and Mexico.

In France, projects are emerging in Dol-de-Bretagne, Paris, Montpellier.

The first generation of toilets with a urine separator were considered impractical and unsightly. A new model, however, developed by the Swiss company Laufen with Eawag has got good reviews.

Fabien Gandossi, who owns the 211 restaurant in Paris, equipped his establishment with this new, dry model that collects urine.

"We have rather positive feedback, people a little surprised, but (..) they see little difference compared to a traditional system," he says.

Are people ready to eat food fertilised with urine?

There are differences in attitude across the countries where urine-based fertilisers have been trialled. The acceptance rate is very high in China, France and Uganda, but low in Portugal and Jordan.

Since urine is not normally a major carrier of disease, it does not require heavy processing for use in agriculture. The World Health Organization (WHO) recommends letting it rest and itis also possible to pasteurise it.

Once collected, the urine must be transported to the fields. But the procedure is still expensive. Various techniques make it possible to reduce its volume and to concentrate, or even dehydrate it.

There are a lot of obstacles, with soaring gas prices and the desire of many countries to strengthen their food sovereignty. Despite this, researchers believe that urine is the future of natural fertilisers.

‘Lego blocks’ of solar energy could power all homes by 2030