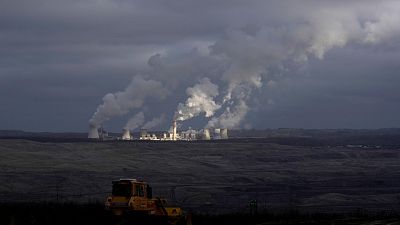 Steam and smoke rise from power plant located by the Turow lignite coal mine near the town of Bogatynia, Poland.   -   Copyright  AP Photo/Petr David Josek, File
By Giulia Carbonaro  •  Updated: 15/04/2022

It’s “now or never,” said the latest report from the Intergovernmental Panel on Climate Change (IPCC) published on Monday. It called on governments to start staving off emissions to save the planet from irreversible climate disaster.

Between now and never, some are apparently choosing never, as new projects announced this week continue to fund fossil fuel production around the world.

The IPCC warned that if we keep going at our current pace, we will exceed 3°C of global warming by the end of the century.

And yet it seems that in the midst of an energy crisis led by the consequences of the pandemic and the war in Ukraine, the urgency of the IPCC’s message hasn’t reached everyone.

Here’s a list of all the new gas and oil projects announced after the IPCC reports came out on 4 April.

A new offshore project for Exxon in Guyana

On Monday, Exxon announced it will invest $10 billion (€9 billion) in a new offshore project off the coast of Guyana, the company’s fourth oil production development in the country and so far the largest in Latin America.

The project, called YellowTail, has been approved by the government of Guyana and is expected to produce 250,000 barrels of oil per day.

Exxon already has three other projects in the Stabroek block, an oil reservoir covering an area of 26,800 square kilometres off the coast of Guyana, and sees potential for 10 more developments.

And they’re not the only ones.

As part of its new energy strategy, the UK government announced on Thursday that licensing of new oil and gas projects in the North Sea will start this autumn.

Environmental campaigners and climate activists reacted with outrage to the move, but the UK government has defended itself saying such projects are necessary to achieve energy autonomy, with a view to getting rid of the uncomfortable dependence on Russian oil and gas imports.

On Thursday, there was climate heartbreak on the other side of the ocean too, as Canada’s government gave the green light to the controversial $12 billion (€11 billion) Bay du Nord offshore oil project.

The project will be managed by ​​Equinor for about 30 years, during which the company will operate a floating offshore oil and gas production facility in the Flemish Pass, in the Atlantic Ocean. It is expected that more than 60 wells will be drilled during three decades of operations.

Canada’s government said that the project will help the country meet energy demands through a difficult time of transition.

The approval followed months of debates and a four-year-long review of the project, but the government, which conducted an environmental assessment of Bay du Nord, concluded that it will not cause significant negative effects to its surrounding environment “when mitigation measures are taken into account.”

These mitigation measures include 137 conditions Equinor will have to satisfy while operating the project, including protecting wildlife, human health and native access to resources.

Most environmental activists strongly disagree with the government’s decision.

UK: Fracking still on the table

British business minister Kwasi Kwarteng announced on Tuesday that he has ordered a short report on fracking to investigate its impact, saying that all options should be on the table to reduce Britain’s dependence on imported energy.

The British Geological Survey will investigate safety concerns related to the controversial practice, ending a moratorium on fracking that had been in place since 2019, when protests forced the UK government to take action to stop fracking in the country.

Portugal’s Galp Energia, a partner of the Exxon-led gas consortium in Mozambique, said on Thursday that it hopes to start building onshore plants in the African country in 2024.

The company has expressed concerns over the security situation in Mozambique, where ISIS militants have been active near liquefied natural gas projects worth $50 billion (€45 billion), Reuters reports.

A new deal between China and the US

Not quite a new project, but still a new investment in fossil fuels (even if a "cleaner" one): China’s ENN signed a new deal with US-based NextDecade on Wednesday to buy 1.5 million tonnes per year of liquefied natural gas (LNG) for 20 years, starting in 2026.

The gas will come from the proposed Rio Grande project in Brownsville Texas which, according to NextDecade, will produce “the greenest LNG in the world.”

LNG is considered the cleanest of fossil fuels - it emits 40 per cent fewer emissions than coal.

On Friday, Ithaca Energy announced it will buy Siccar Point Energy, the company behind the controversial Cambo oil field off Shetland, a project which had been put on hold last December when Shell pulled out.

Shell had 30 per cent of stakes in the company, but withdrew from the project saying the economic case for investing in the project wasn’t “strong enough.”

Ithaca Energy, the UK North Sea production arm of Israel’s Delek Group, which acquired it in 2017, is buying Siccar Point Energy for €1.39 billion.

The acquisition means that the Cambo oil field is likely to be expanded in the future, despite outrage from environmental campaigners, who believe the expansion of the development will worsen the climate crisis.