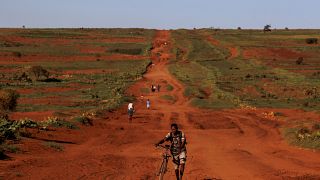 Four years of drought, along with deforestation caused by people burning or cutting down trees have transformed the area into a dust bowl.   -   Copyright  REUTERS/Alkis Konstantinidis
By Doloresz Katanich  with Reuters  •  Updated: 20/03/2022

The once lush and green island of Madagascar is turning into a red desert and facing a severe food crisis seen as the world's first 'climate change famine'.

The fourth-largest island on the planet and one of its most diverse ecosystems, Madagascar has thousands of endemic species of plants and animals such as lemurs. But in its far southern regions, the reality on the ground has changed.

With precious few trees left to slow the wind in this once fertile land, red sand is blowing everywhere: onto fields, villages and roads, and into the eyes of children waiting for food parcels.

Four years of drought, linked by the United Nations to climate change, along with deforestation caused by burning or cutting down trees to make charcoal and farming, have transformed the area into a dust bowl.

This period of years of drought, deforestation, environmental damage, poverty and population growth has led to a major food crisis in southern Madagascar where more than one million people currently need food handouts from the World Food Programme (WFP), a United Nations agency.

At the height of the food crisis in the south, the WFP was warning that the island was at risk of seeing "the world's first climate change famine." However, the situation is getting better after months of intervention.

Theodore Mbainaissem, who runs WFP operations in the worst-hit areas in southern Madagascar, said weather patterns had changed beyond recognition in recent years.

"If you ask the elders 'do you think it's going to rain,' they say they don't know. Before, they could tell from the position of the moon when it was going to rain, but people do not manage to analyse anymore," says Theodore Mbainaissem, WFP chief for Androy and Anosy.

Mbainaissem said that after months of action from the WFP, other aid organisations and the local authorities, the worst of the food crisis is over.

But the work is far from done. While villagers living in dire poverty are still cutting down trees to cultivate the land, the United Nations' IPCC climate change panel expects that droughts will continue to be a problem.

While some scientists say the current situation is within Madagascar's normal range of weather patterns, everyone agrees that the food crisis shows a country already struggling to cope.

Watch the video above to find out more about the food crisis in Madagascar.