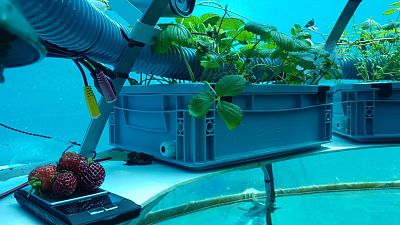 The world's first underwater farm, dubbed 'Nemo’s Garden', is producing fruit and vegetables off the coast of Italy.

In Noli, a unique structure consisting of six underwater greenhouses was by the Ocean Reef Group in 2012. Step by step, the project started to yield various herbs such as basil different types of salad, tomatoes, courgettes, beans, green peas, aloe vera, mushrooms and strawberries.

But the project suffered serious storm damage in October 2019 and was very close to ending altogether. The team worked on giving new life to the six underwater air-filled pods anchored to the bottom of the sea in order to keep the farm up and running.

Soon another challenge came looming. Due to COVID-19 restrictions, they had to leave the habitat unguarded for months. Yet, the structure fended for itself, unguarded, and the farm has just been re-opened more resilient than ever.

By 2050, we will need to feed a global population of 9 billion with an increasingly unstable climate. Ocean Reef Group believes that underwater farms could provide a source of food for coastal communities where agriculture needs to get creative.

The organisation gives the example of the Maldives which imports nearly 100 per cent of its fresh produce by air. Places like this could be "transformed into a self-sustaining agricultural nation using underwater greenhouses to cater to the local and tourism industry."

Researchers also say that the Italian farm is improving the local marine ecosystem too. At the Liguria facility, seahorses have been found in an area they have never been seen before.

Click on the video above to see the fruit and veg growing in the underwater garden.

Pangolin’s are the world’s most trafficked animal. But why?