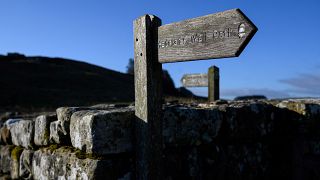 This year marks the 1900 anniversary of the start of the construction of Hadrian's Wall, which took 6 years to complete.   -   Copyright  OLI SCARFF/AFP
By Doloresz Katanich  with AFP  •  Updated: 13/02/2022

Nineteen hundred years after it was built to keep out barbarian hordes, archaeologists at Hadrian's Wall are facing a new enemy -- climate change. It is threatening a vast treasure trove of ancient items.

The 118-kilometre stone wall is one of Britain's best-known historic tourist attractions. It crosses England from west coast to east coast, marking the limit of the Roman Empire and forming Britain's largest Roman archaeological feature. It is also a UNESCO World Heritage site.

Construction begun in 122 AD during the reign of emperor Hadrian. The Roman soldiers who lived there left the fascinating detritus of everyday life that allows archaeologists today to reconstruct how they lived in the windswept north of the empire.

Over the last 50 years, the dramatic landscape around the wall has revealed stone and wooden structures, leather shoes and clothing, tools, weapons and even handwritten wooden tablets, feeding knowledge of what life in Roman Britain was like.

But the artefacts already discovered are said to be just one per cent of the actual treasure lying underneath.

Global warming is drying out the soil

Some 33 miles west of the modern day city of Newcastle at the fort of Vindolanda, one of 14 forts along the wall, 5,500 leather items have been found so far.

Thanks to the black, peaty soil, many of the artefacts have kept a fascinating level of detail.

"They are fantastic because they've completely changed our perception of the Roman Empire the Roman army, they've changed it from being a male preserve to lots of women and children running around," says the director of excavations and chief executive of the Vindolanda Trust Andrew Birley.

Archaeologists believe the majority of the artefacts are still hidden under the ruins.

"Less than one per cent of Hadrian's Wall has been explored archaeologically and a lot of that landscape is protected in this wet peat land environment and that's a landscape that's really under threat," says Birley.

As our climate heats up, the ground warms more rapidly than the air temperature, drying out the soil. It then cracks up allowing oxygen to ruin the treasures underneath.

"When that oxygen gets in there, things that are really delicate, that are made of leather, textile, items of wood, crack, decay and are lost forever," says Birley.

Now, instead of defending Roman Britain from unconquered Caledonia to the north, the race is on between archaeologists and climate change.

Watch the video above to learn more about what is at stake.