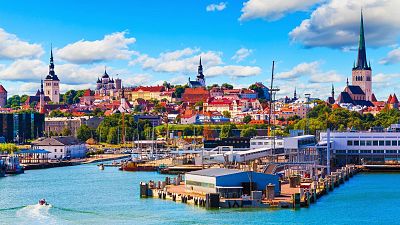 As cities around the world scramble to find greener modes of living, one European capital is already leading the way in the race for sustainability.

Tallinn, the capital of Estonia and the most northerly of the Baltic cities, has implemented a number of drastic changes in order to achieve carbon neutrality by the year 2050.

These strategies were praised by the European Commission last year, with the city being named the European Green Capital for 2023.

But with more and more metropolises striving to reduce their carbon footprints, what can we learn from Tallinn’s modern approach to sustainability?

Protecting public land, reducing noise pollution and improving water quality were key to Tallinn being awarded the illustrious title, according to the European Commission.

Chief among these actions is the city’s dedication to providing ample green space for its inhabitants. Tallinn’s network of parks now tops 90 m2, constituting 19.5 per cent of the city’s total landmass. This contrasts with just 9.5 per cent in Paris.

A recent study suggests that Europe's cities could prevent up to 43,000 premature deaths a year if they supplied adequate green space for urban dwellers.

And while Tallinn’s population continues to rise - the capital now has more than 445,000 residents, according to recent figures - a number of key projects are in place to ensure sustainability remains at the heart of this growth.

‘Tallinn 2030’ is a long-term strategy intended to build a “healthy city environment and sustainable use of natural resources” by the year 2030. The project is supported by the Tallinn Landscaping Action Plan, the Rainwater Strategy and the Sustainable Energy Action Plan.

Such well-intentioned schemes invariably provoke accusations of greenwashing from critics, but look beyond their impressive titles and tangible change is behind them.

On the fringes of the city, a herd of Scottish Highland cows can be seen snacking on plants in the Paljassaare nature reserve, helping to boost biodiversity and maintain the area as a habitat for wild animals.

And while the city’s growing green space is open to the public, it also has an ulterior motive.

The city is encouraging parks, gardens and nature reserves to remain wild in an attempt to encourage insect pollination.

"The aim is to enlarge the possibilities for the pollinators and also attract more people to use the pollinator highway as a green corridor which goes through six city districts," says gardener and landscape architect Liivi Maekallas.

This 13-kilometre walkway is yet another example of Tallinn encouraging its citizens to ditch private vehicles and adopt a more sustainable approach to transportation.

The city received widespread attention when it made access to public transport free for residents in 2013 - a key waymarker on the city’s journey towards achieving a 40 per cent reduction in emissions by the year 2030.

“For us, a green capital means that Tallinn is inviting, comfortable, and clean – a city of the future,” says Mihhail Kõlvart, the mayor of Tallinn.

“The time has passed when the protection of nature and the progress of people are opposites – we have learned to associate innovation and development with a sustainable economy and green thinking.”

The baltic capital also aims to increase the number of cyclists on its roads, aiming for 11 per cent of journeys to be made by bike by the year 2027.

“You have to have a good idea why people should cycle and have some disincentives towards motorists,” he says.

“You have to kind of take some space from them because if you don't take space, they won't change their routine and they will still drive.”

The Estonian capital was once home to a number of heavily polluting industries, including minerals and paper.

Today, these industries have been replaced with a surge in entrepreneurship, academia and heavy investment in developing technologies.

And as the city’s green projects expand, the standard of living offered to its residents continues to improve as well.

Tallinn resident’s benefit from the best quality of life in the world, according to a study by apartment rental brand Essential Living.

Further spending on environmental initiatives will only make the city a more pleasant place to live, according to Krista Kampus, Tallinn's head of development.

"I think that making the city greener and more climate neutral, is also economically and financially beneficial in the long term,” she says.

“In the short term, we have to make investments and we have to spend some money, but if the result is a better, greener, more liveable city for everyone, then I think this is money worth spending."

Watch the video above to see Tallinn’s green initiatives in action.