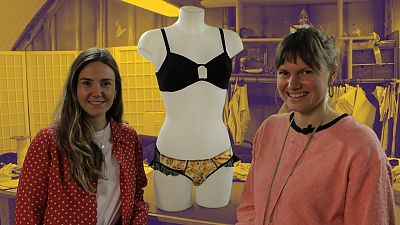 Welcome to the second episode of Euronews Green’s new video series: Green in the City.

In each episode, you’ll discover a pioneering project tackling an environmental issue in a city. Our first series hones in on London and the weird and wonderful ideas that unite local people in protecting our planet.

“This is what you call slow fashion in its extreme,” says Debbie as we dig into the soil at her East London allotment.

It’s a crisp, early December morning and Debbie Mitchener and I are picking flowers together to form natural dye. Tansy, marigold, woad seeds and fennel all create yellows, purples, blues and reds that we’re planning on using for a special project.

Debbie is the founder of Cordwainers Natural Dye Studio in London and is showing me how to dye material in an environmentally-friendly way, without any chemicals or toxins.

I’m here to learn all about making an item of clothing from start to finish - from picking the plants for the dye and boiling the colour onto the material, to cutting out a template and sewing it altogether.

But it’s not just any item of clothing - I’m making our most intimate garment, as women.

A pair of knickers.

The average item in the UK is worn only 14 times before we get bored of it.

So we’re buying cheap clothes that put both lives and the planet in danger and then - barely wearing them? 235 million pieces of clothing will be sent to landfill this year, worth around £140 million (€164m), according to The Waste and Resources Action Programme (WRAP).

Underwear makes up a huge portion of the bags and bags of clothing sent to landfill. And it just sits there, for hundreds of years, never breaking down or returning naturally to the earth - because it’s made from synthetic materials like polyester and nylon.

And with (unsubstantiated) studies circulating that advise consumers to dispose of their underwear after six months to a year, the speed with which cheap, poorly made underwear is bought and disposed of increases.

So Debbie has teamed up with Alice Holloway, the founder of Little Black Pants Club, to make knickers with a longer lifespan.

Made from locally grown British silk - you can literally plant these in soil once you’ve got enough wear out of them and they naturally biodegrade. From soil to…soiled, as Alice tells me with a smile.

And what's more, they won't release any microplastics into our rivers and oceans when you wash them either.

Back in the garden, we’ve gathered up enough plants and head back to the studio to dye the material.

This is where it gets really fun. Debbie describes making a bundle dye as like being back at school in an art lesson and being able to play and experiment with colours and patterns.

I’m nervous I’m going to burn myself when I place the material into the boiling saucepan (I'm a bit of a butter fingers) but, under strict instructions, I retrieve the bundle dye easily and am surprised to find an intricate pattern on the fabric.

You can literally plant these in the soil once you’ve got enough wear out of them and they naturally biodegrade.

It reminds me of my rebellious tie-dyeing days as a teenager.

Debbie explains why commercial dyes are so harmful for the environment. In big industrial production, some of the dye doesn’t bind to the fabrics and is lost to the wastewater stream. Approximately 10-15 per cent of these fossil-fuel based dyes are then released into the environment, polluting our waters and our soil.

When I think of all the underwear I’ve bought in the past, I’m pretty sure it’s all been dyed using toxic chemicals. It makes me shudder now just to think of my blissful ignorance.

And just because something is naturally dyed, it doesn't mean the colour is going to be any less vivid or long lasting. Just look at all the old clothing in museums and how well the colour has stayed for hundreds and hundreds of years.

I’m excited to get to Alice’s workshop and get my hands on a sewing machine - as my vision of a pair of pants is coming to fruition in my mind.

The studio has a rustic feel to it, right underneath a railway arch. Decked out with all shapes and sizes of mannequins adorned in lingerie, there are old Singer sewing machines everywhere you look and lace and ribbons spilling out of the drawers.

There’s something so satisfying about cutting out the sewing template, it’s almost like Christmas baking.

It takes a while to get to grips with the pedal and threading up the machine, but we work together and before long a pair of pants emerges.

I’m honestly amazed by the final product, as I’m sure you can see by my face.

I feel a sense of respect for the pants I’ve created. They’re completely natural, locally grown, sewed - and sexy. Just because they’re biodegradable, doesn’t mean they have to be granny pants, in fact, quite the opposite.

The black lace trimmings are the final touch because as Alice says, “sexiness is a state of mind”.

Sexiness is a state of mind.

It makes me want to take care of this intimate item and treat it well before it comes to the end of its life. And when it does, I know I can place it back in the earth where it will decompose and mingle with the soil without hurting or harming it.

If you’d like to support Debbie and Alice’s mission to help make more biodegradable pants and ramp up production all over the UK and beyond, donate to their crowdfunder here.

Watch the video above to see more about these all natural, biodegradable underwear.

Green in the City