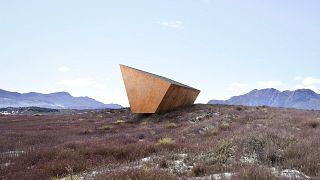 This artist's rendering shows what the 'black box' could look like.   -   Copyright  Earth's Black Box/www.earthsblackbox.com
By Rosie Frost  •  Updated: 09/12/2021

This big ‘black box’ will soon record everything we say or do about climate change - and help future generations understand more about how we got into this crisis.

The practically indestructible 10-metre long steel structure is being built on a granite plane on the west coast of Tasmania, Australia. The final location is currently unknown, with its creators saying it has been chosen for its “geopolitical and geological stability.”

Construction is due to start next year but many of the details of the project are shrouded in mystery.

The black box will be powered by solar panels to ensure it keeps running even if external sources fail. Inside will be computers and hard drives recording an “unbiased account of the events that led to the demise of the planet.”

Data on sea levels, temperature, CO2 in the atmosphere and other environmental measurements will be documented alongside tweets, headlines and posts about climate change pulled from the internet by an algorithm. Talk about futuristic.

Black boxes are usually found in aircraft so that investigators can put together what happened if they crash. The final moments of these tragic events provide information that can help others avoid the same fate.

Earth’s Black Box is doing something similar for climate change. It is hoped that this record of the end of the world will help survivors piece together the scenarios that caused civilization to collapse.

"Ultimately, the box will contain the story, and knowingly keep us all accountable of how humanity tackled - or potentially failed against - its greatest challenge yet," its creators say.

The project, by Clemenger BDDO and the University of Tasmania, also acts as a warning to those with the power to act. The marketing firm told ABC that it is there to “hold leaders to account - to make sure their action or inaction is recorded.”

By documenting information like tweets and headlines, they are hoping to inspire more concrete change. In a way, the aim is to make Earth’s Black Box entirely unnecessary.

Only one thing is certain: your actions and inactions are now being recorded.

“How the story ends is completely up to us,” says the project’s website. “Only one thing is certain: your actions and inactions are now being recorded.”

The beta version of the project is already running at another unnamed location and has been creating a record of what did - or didn’t - happen at COP26 in Glasgow earlier this year.

The first recordings that go into the box will be the discussions, promises and commitments made by global leaders at the conference.

They are still trying to figure out the best way to make this data available if the technology to access it no longer exists after a future apocalypse. Getting through the thick steel walls will be the first challenge. It is assumed anyone with the technology to do that will be able to interpret basic symbols which could provide one avenue for communication.

Currently, there will only be 30 to 50 years worth of space on the hard drives, with scope to improve or expand at a later date.

According to the ABC report, those behind the steel monolith are also looking at other features including periodically transmitting information into space and a data reader that would be activated when it is exposed to sunlight.

But for now, while civilisation still exists, anyone with an internet connection can see the information recorded by Earth’s Black Box. Visitors to the site will also be able to connect to WiFi - something its creators claim will still be possible even when the internet no longer exists.