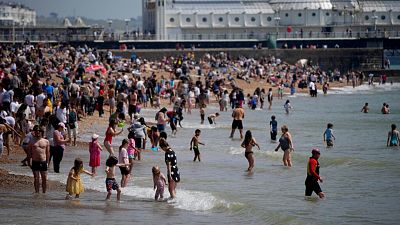 People venture into the sea as they enjoy themselves during a hot day on Brighton Beach.   -   Copyright  Matt Dunham/Copyright 2021 The Associated Press. All rights reserved
By Rosie Frost  •  Updated: 25/11/2021

Sewage pollution in UK rivers has increased by more than 85 per cent over the last year, according to a new report.

The findings from campaign group Surfers Against Sewage (SAS) say that a total of 5,517 sewer overflow notifications were issued by water companies over the 12 month period. Last year that number was 2,941.

Sewage discharge usually only happens when heavy rainfall adds too much water to wastewater treatment plants. This is called an overflow and it is an important part of managing sewers to prevent flooding in streets and homes. The report notes, however, that it is happening more and more during periods of ‘normal’ rainfall - adding to the pollution problem.

SAS also found that a majority of these discharge notifications happened between 15 May and 30 September - bathing season in the UK. One in six days were rendered “unswimmable” due to sewage pollution during the official bathing season alone.

One in six days were rendered “unswimmable” due to sewage pollution during the official bathing season.

With some water companies only providing information during this season, Surfers Against Sewage says this means the figures are likely a conservative estimate of how much sewage has been released into UK waters.

The reality is likely much, much worse.

“The findings of our report are shocking and outrageous, but they are by no means unexpected,” says Hugo Tagholm, chief executive of SAS.

“The fact is, water companies continue to increase profits whilst causing catastrophic damage to river and coastal ecosystems, with limited consequences.”

The discharge of sewage pollution has left the UK's rivers in a “particularly poor state”, says SAS.

As part of the report, citizen scientists collected water samples at eight locations across the country.

This testing found six out of the eight river sites monitored had elevated E. coli levels, all returning an overall poor water quality result throughout the bathing season.

“Environmental pollution plays an important role in the “silent pandemic” of antimicrobial-resistant infections,” says Prof. William Gaze, Professor of Microbiology at The European Centre for Environment and Human Health.

“Sewage contains high levels of antimicrobial-resistant bacteria and antimicrobial drugs which are likely to contribute to the emergence of new resistance mechanisms in human pathogens.

“It is essential that we reduce sewage discharges, and improve wastewater treatment, to reduce the risks to human health associated with exposure to natural recreational waters.”

SAS's report found that one in three reports of sickness after bathing were linked to a pollution event in the local area.

Aidan Brackenbury from Devon is one person who has seen the health impacts of poor water quality.

“I went surfing and then developed an ear infection, which caused swelling severing my facial nerve and right-sided facial palsy. The right side of my face was completely paralysed for four to five months. Today, I still don’t have full movement,” he explains.

“The pollution in North Devon where I surf is awful, from sewage discharge to fertiliser runoff from the fields, as well as the risk of a disused landfill site roughly 50m from the water’s edge.”

It is even impacting those whose businesses rely on the sea, including Steve Crawford who runs a surf school in Scarborough.

I have seen individuals become seriously ill as a result of swimming in the polluted water and I have had to cancel surfing classes due to the water quality being so bad.

“This new report by Surfers Against Sewage reveals that the coastal water here in Scarborough is the worst affected by sewage discharge in Yorkshire,” he says.

“What we are witnessing happen to our seas and rivers is unacceptable and I have seen first-hand how it can affect people’s health and local businesses.

“I have seen individuals become seriously ill as a result of swimming in the polluted water and I have had to cancel surfing classes due to the water quality being so bad that it would be a risk to human health to take anyone in,” says Crawford.

UK water companies are already under investigation after admitting that they may have illegally released untreated sewage into rivers and waterways during new checks earlier this month. The Environment Agency and Ofwat say they are looking into a third of sewage treatment plants in the UK and Wales

Sewage has already become a national talking point after debates around amendments to the recent Environment Bill. This enshrines in law the requirement for water companies to “significantly reduce storm overflows.”

“The public outrage around the sewage amendments in the Environment Act show just how deeply people want action,” Tagholm says.

He adds that the government has said it now has the legal tools in place to hold water companies accountable - and SAS will be watching to make sure that happens.

“The proof will be when sewage emissions are drastically reduced or eliminated, and our rivers and coastline meet the standards that the water industry should have helped deliver many years ago."