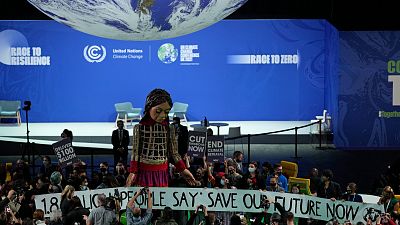 There was more than one topic up for discussion at COP26 today. Gender was the theme of the day alongside science and innovation.

But there were updates too to pledges made earlier in the conference and a look at what the commitments made so far mean for the future of the planet.

As the summit well and truly enters its final leg, here are the takeaways from day nine.

1. Gender Day highlights the impacts of climate change on women and girls

On Gender Day, COP26 turned its focus to the disproportionate climate impacts suffered by women and girls across the world.

“Climate change is sexist,” a US government official put it on Tuesday and 80 per cent of people displaced by climate change are women and children, according to UNFCC.

“But women and girls are also leading efforts to tackle climate change in communities around the world,” said COP26 chairman Alok Sharma.

The puppet of a 10-year-old Syrian girl known as Little Amal also arrived in Glasgow today. Samoan activist Brianna Fruean said Amal "represent all girls who could not be here” at COP26, as she opened Gender Day.

"There has been new momentum from around the world to put gender at the forefront of climate action on Gender Day," the UK COP26 Presidency said.

Pledges for dedicated climate finance poured in, notably a $14 million (€12.1 million) commitment by the US to the Gender Equity and Equality Action Fund and "$3 million investment to support women farmers in East Africa to adapt to climate impacts."

It is so far undefined whether this finance will be a loan or grant.

3. 'We still have a mountain to climb', says chair as clock ticks to strike cover deal

Meanwhile, the hard work on the summit’s cover decision continued in negotiation rooms.

Teams of two ministers - one from a rich country, one from a poor - have been assigned to oversee negotiations on each topic that will form part of COP26's cover deal, the UK Presidency said.

Sharma said the Presidency will publish a first draft of the summit's final decision overnight. New texts have been tabled on time frames, transparency, finance and adaptation so far.

“We still have a mountain to climb,” warned Sharma as the clock ticked to strike a deal that will help limit global warming to 1.5 degrees Celsius.

"What has been collectively committed to goes some way, but certainly not all the way, to keeping 1.5 within reach,” he added.

"Assuming all countries implement everything they have proposed here, we would in 2030 still emit twice as much as what we should if we want to be on a 1.5C trajectory," said Professor Niklas Hohne of the NewClimate Institute at a press conference.

He recommended that the global community goes "in emergency mode", with reviews of COP's targets each year rather than every 5 years.

South Korea became the latest country to backtrack on its pledge to phase out coal by 2030 just days after signing it.

"We support accelerating the transition to clean power, but we never agreed to a date for the transition away from coal," said the country's energy ministry, which reiterated a 2050 coal exit.

The move has sparked criticism from environmental activists.

"The Korean government has lost its climate credibility by signing on to a momentous global pledge and then quietly backpedalling at home," reacted Korean NGO Solutions for our Climate.