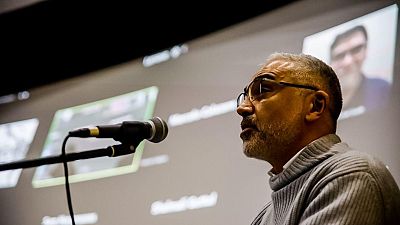 Activists and experts find the UNFCCC 'guilty' for not acting on climate change.   -   Copyright  Oliver Kornblihtt
By Rosie Frost  •  Updated: 08/11/2021

Sunday was an official break day for proceedings at COP26 - but that doesn’t mean that climate events weren’t still happening across Glasgow.

Organised by the COP26 Coalition, the People’s Summit for Climate Justice was one of those events. And as negotiators and COP attendees took a well-deserved rest, a People’s Tribunal took place. This is a simulated trial with the aim of holding the UN accountable for failing to act on climate change.

Made up of activists, experts, NGOs and even a former COP negotiator from the Global South, the tribunal heard four hours of evidence against the UNFCCC, the UN organisation behind these climate talks.

“I grew up being afraid of drowning in my own bedroom,” said Mitzi Jonelle Tan, a climate activist with Fridays for Future Philippines who was presenting evidence at the tribunal.

I grew up being afraid of drowning in my own bedroom.

“Sometimes there would be floodwater in the middle of the night. The recent Children’s Climate Risk report shows that approximately 1 billion children, nearly half of the world’s children, live in the thirty-three extremely high-risk countries.”

Tan added that many feel a strong sense of betrayal from world leaders as they pursue “empty promises and lies inside the UNFCCC.”

What was the UN found guilty of?

So what was the verdict? After all the evidence was presented by people both in Glasgow and joining via video call from around the world, the jury found the UNFCCC guilty of six charges:

It also ruled that the UNFCCC has violated the UN charter by failing to both achieve international cooperation and take effective collective action on climate change.

Today I'm at the People's Tribunal on the UNFCCC.

Here activists from the Global South, experts and former negotiators are putting the UN on 'trial' for failing to stop climate change. pic.twitter.com/HssJvvLe8I

“It has forged an intimate partnership with the very corporations that have created the climate crisis,” said Vijay Prashad, executive director of the Tricontinental Institute for Social Research.

“The developed countries pledged to provide $100 billion (€86.4 billion) per year for the climate fund. They have not provided that money, neglecting their own commitments.”

Prashad added that the UN had refused to democratise the process or to listen to those on the frontlines of climate change.

That includes Indigenous communities and formerly colonised countries as well as one billion young people from 33 high risk nations who “bear the brunt of a crisis that they did not produce”.