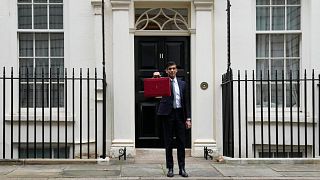 Britain's Chancellor of the Exchequer Rishi Sunak holds up the traditional ministerial red dispatch box as he leaves for the House of Commons to deliver the Budget in London.   -   Copyright  Alastair Grant/Copyright 2021 The Associated Press. All rights reserved
By Rosie Frost  •  Updated: 28/10/2021

Just days before COP26 begins, the UK Government has set out its tax and spending plans for the next year - and they’re not looking hopeful.

The budget speech seems to be missing any mention of tackling the climate crisis and features several announcements that experts say are likely to “drive carbon emissions up”.

Despite the UK’s net-zero strategy being released last week, the speech didn’t touch on this much, with UK Chancellor Rishi Sunak mentioning it only twice.

“With only days to go before Boris Johnson hosts crucial talks in Glasgow, this financial announcement was shockingly bad, and will do little to show his government recognises the enormity of the climate crisis we face,” says Friends of the Earth’s head of policy, Mike Childs.

“Fast-tracking the shift to a zero-carbon economy, with much greater investment in our homes, public transport and nature should have been at the heart of Rishi Sunak’s plans.

One of the more controversial announcements in Sunak’s speech was a pledge to cut air passenger duty on domestic flights in half. This will mean that air travel within the UK is cheaper.

Molly Scott Cato, former Green MEP and professor of economics at the University of Roehampton calls Sunak’s decision “frankly incomprehensible”. It is a measure that she believes “flies in the face” of climate logic and is in stark contrast with policies in EU countries such as Germany and France.

France is currently looking to ban domestic flights where trains are an available alternative, in a bid to cut carbon emissions. Any journeys where a similar trip takes less than two and a half by rail could soon come to an end.

Just one day before the budget speech, the Climate Change Committee which advises the UK government on issues like this said that “government leadership, public engagement and wider policy” was needed to encourage a shift away from flying.

I struggle to see how the government's position on air travel is consistent with their commitment to reach net-zero.

The group also said in an assessment of the country’s net-zero strategy that it has “nothing to say” on limiting the growth of people flying.

“I struggle to see how the government's position on air travel is consistent with their commitment to reach net-zero,” says Professor Martin Siegert, co-director of the Grantham Institute for Climate Change and the Environment.

“We should not be cutting air passenger duty on domestic flights given that passengers do not pay VAT on tickets and it sends the wrong message just days before we host COP26.”

Why is the government freezing fuel duty?

This is in spite of the UK budget in March this year saying that future fuel duty rates would be considered “in the context of the UK’s commitment to reach net-zero emissions by 2050”.

“We lack a serious strategy for motoring taxation,” the Institute for Fiscal Studies said in a report released earlier this month.

It added that despite people wanting to shift to low-emissions cars, the government has continued to freeze fuel duties for more than a decade.

Professor Cato says that this move is “encouraging motorists to use dirty carbon fuels when we should be shifting towards public transport, active travel, and electric vehicles”.

A lack of global leadership on climate change

There has also been anger about the lack of climate commitments put forward by the UK Chancellor from experts and environmental groups. They say that it shows a lack of climate leadership ahead of CO26.

“Despite the Chancellor’s window-dressing, his plans will simply prolong the UK’s dependency on fossil fuels and makes it far harder to seize the substantial job and export opportunities that climate leadership would bring,” says FoE’s Mike Childs.

Failing to rapidly decarbonise, he adds, will leave the planet facing the effects of the climate crisis including extreme heat, wildfires and flooding.

While businesses have understood the opportunities that arise from a transition to sustainability, it appears that the Chancellor has not.

“With make-or-break climate negotiations about to commence in Glasgow at the UN Climate Change Conference, climate investment should have been at the heart of the UK government’s budget yesterday,” concludes Molly Scott Cato.

“While businesses have understood the opportunities that arise from a transition to sustainability, it appears that the Chancellor has not.”