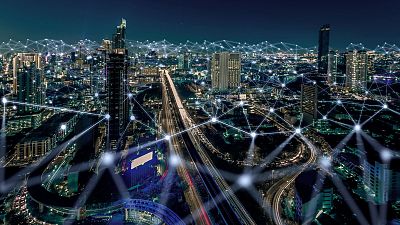 As the world grappled with the spread of COVID-19 last year, a dangerous new breed of disinformation took root. It is one that links the unprecedented rules imposed during the pandemic with the radical measures that will be required to halt climate change.

It’s no surprise that parallels are drawn between the two crises. Both have caused seismic global impacts, on vastly different scales and timelines. But the ‘climate lockdown’ conspiracy brings them into a false and damaging proximity.

A new report by the Institute for Strategic Dialogue (ISD), a global organisation tackling extremism and polarisation, explains how this conspiracy claims that governments will strip people of their freedoms under the pretext of tackling climate change.

“It's important to recognise that fear of government overreach or authoritarianism is not in and of itself extremist,” senior policy manager at ISD Jennie King tells Euronews Green. What is problematic, however, “is when all public issues are brought into a conspiratorial framework which implies there are unseen power dynamics at play.”

Over the last eight months, ISD has tracked how ‘climate lockdown’ paranoia took hold. It found that right-wing figures were hitching a ride on poorly-worded headlines from the media.

A Guardian article with a misleading headline (top image, changed after a few hours to the bottom) suggesting a ‘global lockdown every two years’ was needed to combat climate change was the 2nd most shared link discussing ‘climate lockdown’, referred to in 28% of all posts (3/12) pic.twitter.com/AeRpVwvL0a

A headline from a March 2021 Guardian article implied that we needed a global lockdown “every two years” to cut emissions. This was seized on by opportunistic climate sceptics. 28 per cent of top Twitter posts mentioning ‘climate lockdown’ between September 2020 and April 2021 made reference to this one article, which re-worded its headline hours after publication.

A similar percentage (29 per cent) cited ‘The Great Reset’ or ‘WEF’, referring to a World Economic Forum summit of that title last year which was twisted into a viral conspiracy theory about a tyrannical world government.

“As populations recover from the trauma of the pandemic, there is greater fear and grievance to capitalise upon, and a broader constituency who could be turned against climate action,” the report warns.

Those pushing social media posts on the “cost of net zero” are also creating the dangerous impression that climate leaders’ ambitions are “too much”, says King. Without really engaging with climate policies, the naysayers posit any solution as too costly, too threatening to people’s livelihoods or sense of self.

“It remains to be seen whether the information attacks against COP will focus on specific articles of negotiation, such as targets for coal phase-out, or whether things will get thrown off course by this broader culture war framing that we’ve seen in ‘climate lockdown’,” she adds.

If it reaches enough people and is “seeded in enough contexts by enough influential figures”, she fears this disinformation does have the potential to weaken policymakers’ resolve. It could mean the outcomes of COP26 are not as ambitious as they need to be.

Time for Big Tech to get a grip

As climate disinformation continues to grow, tech giants like Facebook are under increasing pressure to stop its spread on their sites.

The social media firm recently announced it would be expanding its Climate Science Centre to provide more reliable information. But as King points out, that is “heavily counteracted by the prevalence of disinformation on the platform.”

Acknowledging a problem is the first step to fixing it, and ISD and partners are calling for the tech sector to include their definition of climate disinformation in the companies’ Terms of Service.

Social media sites are also being urged to remove loopholes that allow ‘opinion-based’ content by climate deniers to circulate freely, as well as advertising from known climate deniers, delayers and greenwashers.