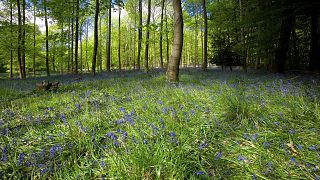 Forests in England are being rewilded and it's bringing the local community back to life.   -   Copyright  Canva
By Catherine Lofthouse  •  Updated: 21/08/2021

It's been 30 years since the first tree was planted in a rewilding revolution in the heart of England, aiming to reclaim an industrial landscape scarred by centuries of mining.

Since then, more than 9m trees have been planted to create the National Forest in the Midlands - the first forest to be created at scale in England for more than 1000 years. It now covers 200 square miles across three counties, linking the two ancient woodlands of Charnwood and Needwood.

Old coal mines and quarries have been repurposed as parks and nature reserves - and 5,000 jobs have been created.

Having grown up in a Midlands mining town and then leaving just as the National Forest was starting to take shape, this story means a lot to me. Since then, I've watched a new woodland grow over the road from my childhood home and I've just moved back to a Leicestershire that is leafier than ever before.

Working in the woods

Among the businesses that now call the woods home is Little Acorns Forest School, based at Hicks Lodge National Cycle Centre near Ashby-de-la-Zouch.

"Hicks Lodge used to be an open cast mine at the turn of the century and we have been really lucky to be working in the woodland that was planted when the area was being transformed into what it is now,” says Director Dave Churchward.

"We have been able to establish ourselves in the woodland, running quality forest school programmes for all ages – from babies through to toddlers and pre-school children through all of the primary and secondary market. We also run training courses to become forest school leaders and now provide first aid training qualifications to Forestry England across Central and Yorkshire districts.”

But none of this would have been possible if Forestry England had not given Churchward and his team initial permission in 2015 to start working at Hicks Lodge. “It remains, after six years, our premier site to run our business from and we continue to grow, which is in no small part to the fantastic location that we are so fortunate to be working in."

As well as an annual festival called Timber, which brings music, arts and wellbeing to the woods, there's even a brand new National Forest trek taking place over three days this September for holidaymakers sticking closer to home this year.

YHA National Forest, Britain’s only purpose-built eco-hostel, has overhanging roofs that shade the building in the summer, shuttered windows to keep heat in during the winter and out in summer, a solar hot water system, a biomass boiler which is fed with wood pellets from the surrounding forest and rainwater collection to flush the toilets.

It proves a perfect base for visiting both the woods and the industrial heritage that has given them a home - close to both CONKERS, the flagship visitor centre of the National Forest, and Moira Furnace Museum and Country Park, with its 200-year-old blast furnace for producing iron.

The role of reforestation

Reforestation is a trend that has been mirrored in the EU. By 2010, forest coverage has increased by approximately 11 million hectares since 1990 and €8.2 billion was earmarked between 2015 and 2020 for forestry projects, including 27 per cent for reforestation, 18 per cent to make forests more resilient and 18 per cent for damage prevention.

For me, it's a great time to discover all the new visitor attractions that are now on my doorstep.

It's strange being a tourist in a place that you call home, but that's exactly how it feels as I get to know the woods that have sprung up since my childhood. In the last few weeks, I've taken my family to Sence Valley, Hicks Lodge and CONKERS, all at the heart of the National Forest.

By 2010, forest coverage had increased by approximately 11 million hectares since 1990 in the EU.

What has struck me is how quickly nature can reclaim a derelict landscape once it's given the chance.

I remember visitors driving past signs for the fledgling National Forest and laughing that there wasn't a tree in sight. They certainly wouldn't say that now.

More woodlands on the way

The success of the National Forest is being echoed elsewhere in the UK too, with an announcement this month that 35 football pitch-sized plots of trees will be planted in the first year of the new North East Community Forest project.

The initiative aims to plant up to 500 hectares of trees by 2025,  with a long-term goal to increase canopy cover across the north-east to 30 per cent by 2050 – almost double the current national average.

Plans for the future include a new 25-acre wood to remember those who've died during the COVID-19 pandemic.

The Nature for Climate Fund managed by Defra (the UK’s Department for Environment, Food & Rural Affairs) is contributing £480,000 towards the project that covers areas in Newcastle, Gateshead, North and South Tyneside, Sunderland and Durham.

At the end of last year, Wales announced the first 14 woodlands that would make up its own new National Forest that will create a network of woods that will run the length and breadth of the country.

In a nutshell, the seeds of success sown by the National Forest project continue to put down roots both in the Midlands and further afield.

Plans for the future include a new 25-acre wood to remember those who've died during the COVID-19 pandemic at the National Memorial Arboretum, at one end of the National Forest.