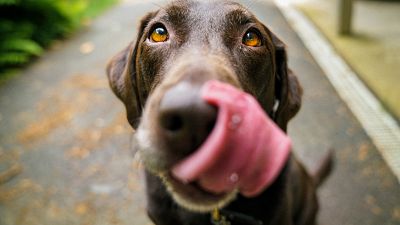 The biggest threat to global health could potentially come in the form of man's best friend. That's what new research suggests after multidrug-resistant bacteria was found in dog food - sparking fears over a possible international health crisis.

A new paper, presented at the European Congress of Clinical Microbiology & Infectious Diseases (ECCMID), warns that "the trend for feeding dogs raw food may be fuelling the spread of antibiotic-resistant bacteria."

The study revealed that Enterococci, a genus of bacteria commonly found in human intestines, was present in more than half the analysed samples.

The concern comes from the fact that this type of bacteria is often intrinsically resistant to antibiotics, meaning some species of Enterococci can lead to dangerous outbreaks. For example, over the last two decades in the US there have been clusters of infections related to VRE (Vancomycin-Resistant Enterococci) - often initially contracted from a hospital.

An estimated 700,000 people around the world die every year from drug-resistant infections. The UN states that this figure could rise to 10 million by 2050 without sufficient action. Antibiotic resistance is classed by the World Health Organisation (WHO) as one the greatest threats to global public health.

Dr Freitas and her team looked at 55 samples of dog food (22 wet, 14 raw-frozen, 8 dry, 7 treats, and 4 semi-wet), from 25 brands available in Portugal and across the rest of Europe. The raw-frozen foods contained beef, goose, duck, salmon, turkey, chicken, lamb, and vegetables.

The rise of raw dog food

Raw dog food, often sold in frozen chunks, has rapidly grown in popularity over the last five years. Data from Google shows a sharp uptick in public searches for the product in 2020, particularly in the UK.

Owners believe that feeding dogs raw meat is healthier for their pets, claiming to see improved dental health, increases in energy levels, as well as healthier coats and skin. Some vets, however, warn that there are health risks for the wider household and dogs with compromised immune systems.

The paper's authors caution that with an estimated 90 million pet dogs in Europe, and nearly 500 million worldwide, dog food may be a dangerously overlooked source of antibiotic resistance globally.

"The close contact of humans with dogs and the commercialisation of the studied brands in different countries poses an international public health risk," adds Dr Freitas.

"European authorities must raise awareness about the potential health risks when feeding raw diets to pets and the manufacture of dog food, including ingredient selection and hygiene practices, must be reviewed.

"Dog owners should always wash their hands with soap and water right after handling pet food and after picking up faeces."

Antibiotic-resistance within the wider meat industry

While the recent UCIBIO study focuses on mass-produced dog food, drug-resistant bacteria is of growing concern within meat for human consumption too.

For decades, antibiotics were used for non-therapeutic purposes in livestock production. In order to meet consumer demands, antimicrobial drugs were used to promote growth in some animals - as well as to boost milk production in cows. By 2001 it was estimated that around 90 per cent of antimicrobial usage in the US was for non-medical reasons in animal agriculture.

This has long been an issue around the world, not just in the US. However, Sweden, Denmark and a handful of other countries began to address the practice in animal agriculture 40 years ago. The EU banned the use of antibiotics for growth purposes in 2006, and the US did the same in 2017.

Research suggests that two-thirds of antibiotic usage worldwide is in farm animals.

However, research suggests that two-thirds of antibiotic usage worldwide is in farm animals. Even though regulation has helped lessen the practice (antibiotic use in livestock has fallen by 50 per cent over the last five years in the UK) - it is still far from being fully addressed.

In Oceania and Asia, the rate of farm antibiotic sales per unit of livestock is four times higher than in Europe.

Fundamentally, antibiotic-resistant bacteria is a matter of concern in all meat production - whether it ends up being food for humans or pets.