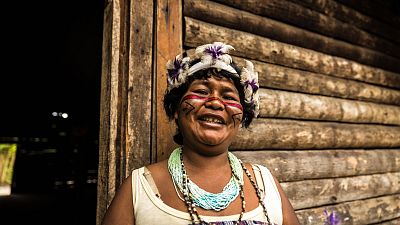 What about the diets of Tsimane Indigenous peoples makes their brain capacities last longer?   -   Copyright  AFP
By Shannon McDonagh  •  Updated: 04/06/2021

Indigenous peoples living in the Amazon have brains which degenerate 70 per cent slower than Western populations, a new study has found.

The experiment, produced by the University of Southern California (USC), found that the Tsimane Indigenous peoples of the Bolivian Amazon experience significantly less brain atrophy than their American and European peers due to distinct lifestyle differences.

Brain atrophy is commonly linked with cognitive impairments, functional decline, and illnesses such as dementia. An ageing population survey by the OECD estimates that by 2040, almost 10 per cent of Europeans will be living with dementia-related illnesses.

Could a plant-based diet keep our brain capacity stable throughout old age?

Over 700 Tsimane adults aged 40 to 94 agreed to participate in CT scans that would calculate their brain volumes in connection to their age. These findings were then compared with three industrialised populations in the US and Europe.

The explanation can be found in diet and physical activity. Scientists attribute the people of Tsimane’s neural longevity to their intake of food that is high in fibre and low in saturated fats, along with their physically mobile way of life.

Though the area has little access to modern healthcare, this is counterbalanced with their lifestyles, the opposite of the more sedentary living in the West. High supplies of fruits, vegetables, and sustainably sourced fish have kept Tsimanes in better health.

USC notes that the Tsimane have high levels of inflammation, which is typically associated with brain atrophy in Westerners. Despite this, their study suggests that high inflammation does not have a pronounced effect upon Tsimane brains.

“Our sedentary lifestyle and diet rich in sugars and fats may be accelerating the loss of brain tissue with age and making us more vulnerable to diseases such as Alzheimer's," says study author Hillard Kaplan, a professor of health economics and anthropology who has studied the Tsimane for nearly two decades.

Though there has never been a better time to be plant-based in Europe, for both our bodies and the environment, we remain far behind the Tsimane.

This is not the first time Tsimane people have made headlines for their stellar health records.

In 2017 the “Amazonian diet” was believed to be a reliable pathway to great heart health. This was rooted in a prior study of the Tsimanes which showed they have the lowest prevalence of coronary atherosclerosis of any population known to science - and very few cardiovascular disease risk factors.

The diet itself pushed for a high calorie intake of plants, protein and unprocessed carbohydrates in which only 8 per cent of ingredients were purchased from outside the tribe.

Connections were drawn between the very low rate of heart disease among the roughly 16,000 Tsimane and their pre-industrial subsistence lifestyle of hunting, gathering, fishing, and farming.

Dr. Kaplan says we can use these two landmark findings to make interventions in the West’s heart and brain health.

"The Tsimane can serve as a baseline for healthy brain aging,” she explains, adding that there are “ample opportunities” for the US and Europe to incorporate these patterns into our own lifestyles.