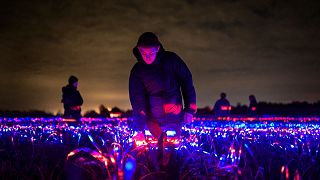 A Dutch designer has invented light technology that can be used to help plants grow faster and more sustainably.

The stunning project GROW is the brainchild of Daan Roosegaarde, founder of Studio Roosegaarde which merges art and tech in urban environments.

So how does it work? Roosegaarde uses what he calls design-based “light recipes” to shine vertically across a 20,000 sq metre piece of farmland in Lelystad, Netherlands.

The mixture of blue, red and ultraviolet lights appear as a vast artwork to the naked eye, creating “dancing lights”. They are shining across a huge field of leeks, the vegetable he has chosen to trial the design on.

During the day, the leeks look like any other field of crops but, by night, they transform into a multicoloured light show.

The technology can enhance plant growth and reduce the need for pesticides by up to 50 per cent, he says.

By working with plant and photo biologists, the Dutch light designer figured out that a certain light recipe would help crops grow more efficiently by essentially lengthening the hours of sunlight they are exposed to.

Roosegaarde has created a film titled GROW which showcases the extraordinary lightscapes and how they help both plants and people.

“It gives a new meaning to the word agri-culture by reframing the landscape as a living cultural artwork,” he explains..

“GROW is the dreamscape which shows the beauty of light and sustainability. Not as a utopia but as a protopia, improving step by step.”

He worked with Professor/Doctor Jason Wargent who is Chief Science Officer at BioLumic, a world leading expert in plant photobiology, who calls the project “fascinating” and says it is supported by scientific research.