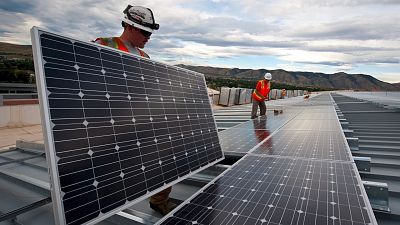 From the way we use transport to developing city spaces, green jobs are on the up.

By 2030, up to 20 million jobs could be created worldwide in sustainable employment. A post-COVID workforce will be looking for economic stimuli through every available avenue, and no line of work will be excluded. As the pandemic continues, so do questions about the relationship between public health and environmental health.

Action is already being taken - Friends of the Earth has commissioned a report in response to the UK’s “youth unemployment crisis” that advocates for the creation of 250,000 new green apprenticeships. Decarbonising the energy sector is a widely accepted policy among governments, and the European Commission has announced plans to at least double the annual energy renovation rate of buildings by 2030.

The roles experiencing the strongest demand apply to a variety of skill sets - an alternative energy engineer might seem worlds away from an urban gardener, but they both require long term positions in roles that offer livable wages.

It’s an exciting time to consider the possibilities of how the demands of sustainability may pave the way for more high quality careers.

Here are the sectors experiencing the most demand as we grow into a better, more climate conscious future.

With over 14 million Europeans working in the automotive industry, it’s a major player with the potential to transfer those roles into sustainably fueled jobs.

An increase in demand for electric cars is giving manufacturers ample opportunities to transition to models that are less harmful to the environment.

There are ongoing debates about whether clean transport will serve to grow or shrink manufacturing roles. The consensus appears to be that though an effective transition will cause the industry to retract at first, the long term job gains are huge - especially when bus and metro travel are considered as people move away from cars.

Germany in particular is a long term prime spot for car manufacturing. Its economics and energy minister Peter Altmaier told an e-mobility conference in Berlin that he wants 30 per cent of global electric battery production by 2030 to come from Europe.

Green city spaces can be beautiful and help with our mental health, but the masses of new plant projects need people to ensure their upkeep.

Urban crops completely rethink what it means to grow and maintain greenery. No longer subjected to diseases and soil, climate-controlled vertical and rooftop gardens are becoming all the rage. It’s impossible for them to not serve as stunning editions to cities such as Milan’s Bosco Verticale.

One of our latest videos explored the addition of a vertical garden to Spanish community centre, and how its clever design provided the perfect system to recycle the water used to keep it alive.

As these incredible structures permeate our landscapes, more and more people are becoming involved in everything from their conceptualisation to their preservation.

Recycling plants were initially constructed under limiting circumstances, despite becoming the process commonplace in our actions to live a more sustainable life. Scientists are working to fix this problem and are constantly coming up with new ways to reconfigure the process, and with this comes higher demand.

A 2015 study from the Circular group found that the expansion of circular economy jobs could transform employment in the UK alone, creating 205,000 opportunities.

This is not limited to just recycling - roles in structural repurposing and reusing are necessary to keep in line with the growing ‘upcycling’ trend. Circular group says this keeps transport costs low and benefits communities.

What’s more, these roles are believed to create at least 9 times more jobs than roles in landfills and incinerators.

Globally, 17 per cent of energy is supplied from hydropower sources, but the path to creating jobs hasn’t always been straightforward.

Hopes for an explosion of new hydropower careers were high at the dawn of the 2010’s, but it has taken some time for industries to adapt as it is one of green energy’s more costly upgrades.

The industry is a well of unused potential, and now is the time for water-based energy to expand. Jobs in this field cover everything from the development of wave technologies to operational management of hydro-plants, the possibilities are so varied.

Growth in this industry benefits rural communities over city dwellers in a refreshing way compared with other green projects. This is due to where most European water is located - microelectric dams are a great example of this, where communities are able to source increased electricity coverage because of it.

Perhaps a lesser known development when it comes to green jobs, biogas is the renewable fuel produced by the breakdown of natural products. It’s a mitigator for climate change that should be taken seriously.

Although it’s a less lucrative venture than some of the other industries on this list, it’s slowly but surely becoming a mainstay within the circular economy.

German company Envitec is at the forefront of this right now, with a portfolio of projects in biogas and biomethane. They propose that it’s an excellent enterprise to sustain the livelihoods of farmers around the world due to its consistency and reliability.

As most of us remain bunkered inside our houses and apartments, it seems fitting that the building sector is being targeted as a key area for economic recovery.

The sector is responsible for 36 per cent of Europe’s CO2 emissions, a problem many construction companies are seeking to address. There cannot be a climate neutral Europe without climate neutral buildings. Building stock across the continent is generally old, energy inefficient and even unhealthy due to indoor air quality problems.

Retrofitting homes to improve energy efficiency is a whole business in itself that is expected to boom over the coming years. This encompasses better insulation, drainage systems, and keeps your bills low.

For newer projects, sustainable materials like recycled steel and cork are a must have that need to be sourced and constructed by more people as the industry transforms. Architects are finding that good design pairs well with materials and energy sources that aren’t as wasteful.

The impact is cross continental, from Shanghai’s wind-powered central tower and the wonders of Melbourne’s Pixel building, to Australia’s first carbon neutral structure.