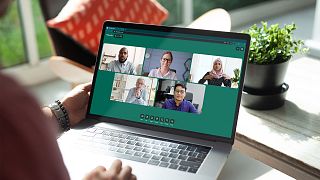 For every three calls on its conferencing app, Whereby plans to plant a tree in plots in Africa.   -   Copyright  Ingrid Ødegaard/Whereby
By David Walsh  •  Updated: 23/02/2021

Remote working is the norm for most of us nowadays, due to the ongoing global health crisis. And while studies suggest that the coronavirus pandemic has precipitated a record decline in carbon emissions, working from home is not without its environmental impacts.

An hour of video conference calling, for instance, is estimated to emit between 150g and 1kg of carbon dioxide into the atmosphere, according to the findings of a recent study by the Purdue University.

A new partnership between climate-positive frontrunner Brynk and Norwegian video conferencing app Whereby, is looking to change that by offsetting the carbon footprint of remote working with an ambitious tree-planting initiative.

What is the ‘Impact Forest’?

Together, the duo has surpassed their target to plant over a million trees - one for every three video calls on the conferencing app throughout February - as the foundation of what will become Whereby’s ‘Impact Forest’.

Founded in 2020, environmental start-up Brynk was born from the vision of bringing together a community of people and organisations to help solve the climate crisis - something both companies are committed to.

The Impact Forest will be planted across protected sites in Kenya, Mozambique, and Madagascar, covering an area roughly the size of 137 football pitches which will absorb approximately 410,000 tonnes of carbon. That’s equivalent to taking 5,700 cars off the road.

Their collaboration is just one of a growing crop of entrepreneurial efforts designed to continue driving the more positive environmental effects of pandemic-related lockdowns - the fall of emissions from human activities like travel and industry.

Estimates from the Global Carbon Project suggest that carbon emissions worldwide dropped by 7 per cent in 2020 compared to the previous year, the equivalent of 2.4 tonnes of CO2 (GtCO2). It represents the biggest fall in fossil emissions since the end of the Second World War.

While it is a significant milestone, it is not sufficient enough to avert the worst effects of the climate crisis. However, for many, it’s being seen as a unique opportunity to strive to cut emissions in the long-term.

According to Ryan Bonnici, CMO of Whereby, the initiative with Brynk offers just such an opportunity.

"The partnership with Brynk allows us to contribute to the restoration and rebalancing of the environment whilst also raising awareness and engaging our employees and customers in the critical mission to fight the climate crisis," he said.

The launch of the Brynk-Whereby partnership comes hot on the heels of similar concepts, including Plantyflix.

The Berlin-based subscription service allows users to balance out their Netflix binges with a similar scheme in partnership with Eden Reforestation Projects, an international charity that has so far planted more than 485 million trees worldwide.

According to the start-up, Netflix users combined emit as much CO2 in 1 second as driving a car nearly four times around the world. Rewatching all five seasons of Breaking Bad on the streaming service, for instance, is enough to emit 21kg of carbon, the same as driving a car for 175 km.

While Brynk and Whereby’s target of one million trees is just the beginning for the initiative, they hope it will just be the start - and set a standard for others to follow.

"We hope that others will follow in the footsteps of Whereby’s decision and example to fully commit to becoming carbon neutral and to making a difference to our planet for the future," said Brynk founder Luke Evans.

Italy's digital divide: One third of students don't have access to online lessons