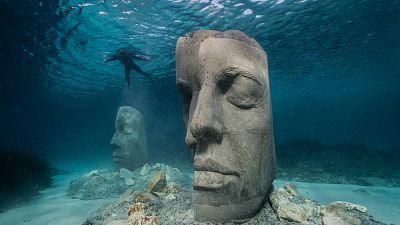 The mask-like sculptures sit on the seabed just not far from the shore.   -   Copyright  @jasondecairestaylor   -   www.underwatersculpture.com
By Rosie Frost  •  Updated: 10/02/2021

An underwater ecomuseum has just opened near Sainte-Marguerite Island, off the coast of Cannes in France.

Six mask-like sculptures have been installed on the seabed that are designed to encourage marine life to return to the area.

Each piece is made from PH neutral materials and has a textured surface to create homes, breeding areas and protective spaces for marine life. The submerged exhibition is placed in between swathes of Posidonia seagrass. Commonly known as Neptune grass or Mediterranean tapeweed, it forms large underwater meadows that are an important part of the sea’s ecosystem.

Seagrass plants are sometimes known as the “lungs of the ocean” because they can generate enormous amounts of oxygen. Boats are being kept out of the area to prevent their anchors from damaging the meadows and to keep divers safe.

Funded by the Mairie de Cannes, the project took four years to develop. The site was once littered with debris such as old engines and pipelines, which were cleared to make way for the museum.

The portraits are modelled on members of the local community including Maurice, an 80-year-old fisherman, and Anouk, a nine-year-old school pupil.

What inspired the sculptor?

For sculptor, Jason deCaires Taylor, his work is meant to be a metaphor for the ocean.

“From land, we see the surface, calm and serene, or powerful and majestic.”

“However below the surface is a fragile, finely-balanced ecosystem - one which has been continuously degraded and polluted over the years by human activity.”

It is his first installation in the Mediterranean Sea but the British artist has created ocean-friendly artwork before. From showcasing marine life in a fjord in Oslo to helping repair reefs in Grenada “decimated” by hurricane Ivan, his work has been placed in bodies of water around the world.

“Generally, my aim is to change our relationship, how we see the sea,” says deCaires Taylor.

He explains that often we think about tropical places like coral reefs when it comes to conservation, but that other less obvious underwater locations can be just as beautiful and biodiverse.

“Each location has had different environments and challenges.”

“In Norway, it was a very cold, brown fjord that I didn’t particularly want to go diving in,” he says. But, once the artist was in the water, he saw an abundance of marine life.

“I even saw seagulls diving under the water.”

Clear tubular sea squirts and mussels have already attached to the base of these sculptures and could help clean the water in an area polluted by industry.

Scientists are able to monitor the development of flora and fauna that are drawn to the sculptures. He adds that the idea is for each of the works to eventually become obscured by the growth of marine life and previous projects have already seen this start to happen.

In the Canary Islands, for example, deCaires Taylor says work with a local University has shown a 200 per cent increase in biomass and found that the art helps protect the seabed from strong currents.