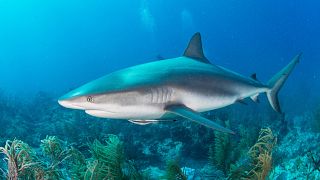 Shark squalene is being considered for use in coronavirus vaccines, warn conservationists. Squalene is a natural organic compound, found in shark liver oil.

Between 2,500 - 3,000 sharks are needed to extract one tonne of squalene. Conservation group Shark Allies predicts that if the world’s population all received one dose of the vaccine, around 250,000 sharks would have to be slaughtered, depending on the amount of squalene used. Two doses for every person in the globe would amount to half a million sharks.

Currently, British pharmaceutical giant GlaxoSmithKine (GSK) uses squalene in flu vaccines. The oil is used as an adjuvant in medicine, an ingredient that increases the effectiveness of a vaccine by creating a stronger immune response. GSK has announced that it would manufacture a billion doses of the adjuvant for potential use in coronavirus vaccines.

Shark Allies is concerned that killing so many sharks will do irreversible damage to our oceans’ ecosystems.

It says we should be using plant-based and synthetic alternatives for squalene, which don’t derive from sharks.

“We are in no way trying to hinder or slow down the development of a COVID-19 vaccine or any other critical treatment that is needed to protect humanity from illness,” states Stefanie Brendl, founder of California-based Shark Allies.

However, she adds, “we are asking that sustainably sourced squalene is used in all non-critical applications and where the alternative is just as effective as shark squalene, and that all future testing of adjuvanted vaccines is giving plant-derived sources equal consideration.”

Sharks are critical to ocean health and function. They are a key element in life systems that affect ocean health, food security, and livelihoods for generations to come. We need the ocean and the ocean needs sharks. But populations have been severely depleted in recent decades.

Using squalene in universally deployed Covid vaccines could be detrimental for many shark species.

Sourcing an ingredient from a wild animal is not a long-term solution.

“It would be unconscionable if more harm was done by something that was avoidable,” says Brendl.

“Moving society away from harmful practices requires awareness and a willingness to tackle a transition period. Profit margins may not look as favorable if taking wild animals is seen as cheaper and easier than other processes. Sourcing an ingredient from a wild animal is not a long-term solution.”